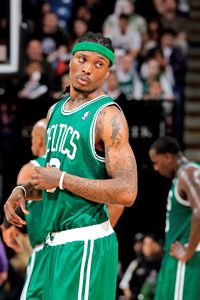 Last year's Marquis Daniels trade will aid the Celtics on Friday.When you're a cap-strapped team like the Boston Celtics, you have to take advantage of every available loophole. And that's exactly what Boston will do Friday when it adds Keyon Dooling and Marquis Daniels to its 2011-12 roster.

Daniels, who spent the last two seasons with Boston on one-year deals, suffered a scary spine injury in early February, essentially ending his 2010-11 campaign. In need of his roster spot, the Celtics traded Daniels to the Sacramento Kings at the deadline in late February, receiving a 2017 second-round pick. That pick is top 55 protected, meaning the Kings would have to be one of the five best teams in basketball in 2016 in order for the Celtics to receive that pick.

So the Celtics got nothing but the roster spot, right? No, they also got a $2.4 million trade exception.

With that, Boston can absorb a contract of similar amount in a trade. On Thursday, the team agreed in principle with the Milwaukee Bucks on a swap that will bring Dooling and his $2.2 million contract to the Celtics in exchange for what will likely be a future second-round pick.

The irony: The Celtics also plan to re-sign Marquis Daniels to a one-year, minimum contract Friday. In a roundabout way, Boston traded away a player that wasn't going to be able to contribute last year, got a valuable roster spot for the remainder of the season, and now will add a valuable backup guard in Dooling, while Daniels comes back at a discounted rate ready to play again.

As a tax-paying team, the Celtics have only the mini mid-level exception ($3 million) to offer a player this offseason. Beyond a sign-and-trade with players they boast Bird Rights to (Jeff Green, Glen Davis), the team will otherwise be limited to obtaining minimum contract players.

For the record, Boston boasts two other trade exceptions after shipping rookies Luke Harangody and Semih Erden to Cleveland at the deadline last year. It's unlikely they can utilize those quite as shrewdly as they did the Daniels exception.