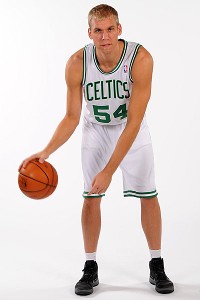 Celtics center Greg Stiemsma.WALTHAM, Mass. -- What Greg Stiemsma lacks in NBA experience he makes up for in frequent flyer miles.

Before landing in Boston, the Celtics center -- a training camp invite competing for a final roster spot -- spent time in Turkey, South Korea, South Dakota and Turkey again. Then it was back to South Dakota for a second stint with the NBA Development League’s Sioux Falls Skyforce, where in four games this season Stiemsma averaged 8.7 points and 3.6 blocks per game.

Along the way, Stiemsma even made a stop in Mexico for the 2011 Pan Am games, winning a bronze medal that’s probably still in his suitcase. In fact, at this point the 26-year-old is so used to traveling that he occasionally tweets about it.

“I love getting upgraded to business class for free,” Stiemsma tweeted on Aug. 28. “Sometimes it does pay to be a giant!”

And therein lies the Celtics’ interest in Stiemsma -- he’s big. Too big, at 6 feet, 11 inches and 260 pounds, for regular airplane seats. The 2011-12 Celtics desperately need that kind of first-class size, and Stiemsma hopes his 83 inches will prove too invaluable to let go.

“Hopefully I [can] bring some toughness, some inside presence, some shot-blocking ability,” Stiemsma said Wednesday after practice at the Celtics Training Center at HealthPoint. “Defense has always been my strong suit, so that’s where I’ve kind of [been focused]. I was looking forward to the challenge coming in, banging with some of the best in the game. Going against [Kevin Garnett] every day, and even Jermaine [O'Neal] -- they’re big dudes. So it’s been fun for me.”

Of his time in the D-League and overseas, Stiemsma said, “It’s been cutting my teeth, kind of getting my grind in, getting experience in, knowing to let the game come to me. I’m getting a little older, a few years into the pro level, so that’s what it’s got to be [now]. You can’t rush too much. You’ve just got to stay within yourself and do what you can do. So I’ve been trying to focus on that, not stepping outside of my comfort zone too much, in terms of what I can and can’t do -- just coming here, doing the things that I do well and doing them well.”

Having played abroad, one thing Stiemsma is no stranger to is pressure, which will certainly help if he does win a shot in the Boston spotlight.

“You have to be mentally tough over there in any situation,” Stiemsma said of his time in Turkey. “And when you’re losing, too, and you see all these guys coming in and out -- it almost turned into a revolving door, where [management] was looking to make somebody pay for [each] loss.

“The team wins, but you lose, at times it feels like. But that’s part of the experience. That’s part of the profession, especially over there. They pay the import guys usually a little bit more, so they expect more out of us too.”

Turkey aside, like most guys his size Stiemsma has always harbored NBA ambitions. So earlier this year, despite the uncertain atmosphere of the lockout, the 2008 Wisconsin grad packed his suitcase again and left Turkey for Sioux Falls, where he cast his lot with the Skyforce and hoped the work stoppage would end and a thin NBA team would pick him up -- which, it turns out, is exactly what happened.

“I feel like it’s a pretty good fit,” Stiemsma said of the center-starved Celtics. “That’s why I’m here. I took a little bit of a risk doing the D-League thing and then hoping the lockout was going to end. And then to choose this team out of some of the other ones that we had options with, I felt like this could be the best fit. So I’m just hoping to make it stick.”

And now that he’s in Boston, Stiemsma said he hopes he can keep his luggage locked away for a while.

“[I’m] absolutely fired up,” he said, his eyes scanning the banners that hang on the Waltham facility’s walls. “There’s nothing like coming in, putting on the green and white, and seeing these banners, the legacy. I grew up watching all the highlights of Bird and Magic, and [this is the] essence of the game. This is where the league was built. So it’s an honor to be a part of this and I’m just trying to make it stick for as long as I can.”