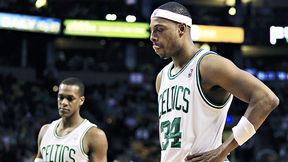 "We’re just working," said Rivers. "Everybody else is here. I’m assuming it’s going on everywhere. But not having two of your starters really hurts, more than the Jeff thing because now the bench can’t actually get together -- two of the bench players are starting now. Keyon [Dooling] has yet to play with the second unit, except for the first day. Marquis [Daniels] or Sasha [Pavlovic] are there in the first unit, instead of playing with the second unit. It affects everybody. It affects Brandon Bass because instead of having Keyon make decisions, you have Avery [Bradley] and [rookie] E'Twaun [Moore] and trust me, the veterans know that. So they’re denying the bigs, they’re putting pressure on the bigs, because they know the young guards struggle getting them the ball. In effect, they’re taking them out of the process. And that’s frustrating."

Until Wednesday, that hadn't detoured the white (reserve) unit as it won every practice scrimmage against the green (starters) since the Celtics got all of their bodies on the floor on Monday. The green finally prevailed during Wednesday's work.

Rivers likes how his team has soldiered on despite the early injuries.

"The effort has been great, the intensity has been good, spirits have been great," he said. "The chemistry is starting to -- you can see it, it’s building. Really, it’s just a little disappointing with not having guys on the floor. It’s not like you have a whole camp or preseason to slowly do it, every day is a crucial day to me. The countdown has begun to the first game."

One thing Rivers stressed is that he's not even concerned with the Raptors, the Celtics' preseason opponent twice next week (Sunday in Toronto and Wednesday at the TD Garden).

"I don’t even care about the preseason game[s]," said Rivers. "I can tell you that I will not mention Toronto, even probably during the game. I’m more concerned about us. If Toronto was the opening night [opponent], then that would be something different, but they’re not. I assume they’re going to do the same thing. You don’t even have time, with a [pair] of preseason games, it’s not going to happen. We’re going to prepare for the first game [vs. the Knicks on Christmas Day]. We’ll get started on that pretty soon, actually."