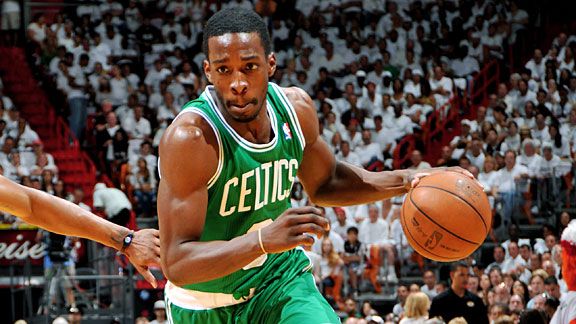 Celtics forward Jeff Green at work last season.BOSTON -- Celtics president of basketball operations Danny Ainge and coach Doc Rivers stressed that we'll find out more about Jeff Green's mystery health ailment on Friday and, while it's dangerous to speculate, a couple thoughts as we await further clarity from the team and player:

* The Celtics were confident enough in Green's health to formally announce his signing on Saturday, but a day later Boston agreed to a one-year, fully-guaranteed minimum deal with Sasha Pavlovic. To some, it was a head-scratcher considering Pavlovic's struggles here last season and the fact that Boston already had two-deep depth behind Paul Pierce on the wing in Green and Marquis Daniels (and with seemingly more pressing needs at shooting guard and center). If Green is to be sidelined for any prolonged period of time, it's clear the Celtics needed more depth, especially given Daniels' own injury history.

* Regardless of the severity of the ailment, you can't help but feel bad for Green. Rivers noted this week how Green flew into town early in order to hit the ground running at training camp -- especially after being thrust into the fire when he was acquired at the February trade deadline. "One of the reasons he came in the day before [camp started last week], the one thing he wanted to do was start early and not fall behind," said Rivers. "Because he felt like that really hurt him when he was traded. So, obviously you can image he’s a little frustrated."

* It's hard to blame Ainge given the seemingly freak nature of this scare, but Boston's general manager will hear even more groans from the hindsight crowd if Green is missing in action to start the season. In dealing away Kendrick Perkins (and Nate Robinson) at February's trade deadline, the Celtics acquired Green, Nenad Krstic, and a future first-round draft pick (top 10 protected and originally property of the Los Angeles Clippers) from Oklahoma City. Krstic bolted overseas during the lockout and that first-round pick's value has potential to dip if the Clippers improve with the recent addition of Chris Paul to a young core.

* There's been a lot of questions in the Mailbag and Twitter about whether Green's contract would be voided if he's simply unable to pass his physical moving forward. It's probably prudent to see what the team announces Friday before even considering that path. One thing to note, even by theoretically removing his $9 million from the Celtics' current cap, the team is still over the luxury tax threshold (let alone the salary cap) and would still be limited to mere minimum contracts to fill out its roster.

* More than anything, let's remember that we're talking about a person's livelihood here. Hopefully the news tomorrow reveals only a minor concern, but let's also maintain perspective that health is paramount to anything related to wins and losses on the basketball court.