Ainge on Bradley: 'Gotta give him a chance'
10yChris Forsberg
The Suns just locked up one of their most important players, but a bigger decision looms
Boston Celtics
3hKevin Pelton
Source: Smart missed flight, won't play vs. Heat
Boston Celtics
3dTim Bontemps
Dec 16, 2011 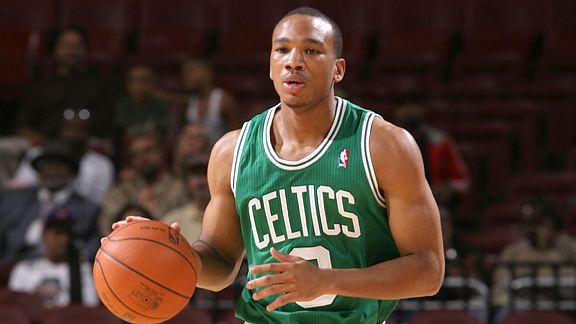 Bradley, the 19th overall pick in the 2010 draft, chipped a bone in his ankle during a pre-draft workout with the Oklahoma City Thunder and was forced to undergo surgery soon after signing his rookie deal with Boston. He missed summer league and most of training camp, which hindered his ability to make much of an impact his rookie year.

Bradley ultimately logged a mere 162 minutes of floor time in 30 appearances (and also had a stint with the Maine Red Claws of the D-League). Celtics coach Doc Rivers later noted Bradley "didn't have a chance," because of all the hurdles. Now, with the confidence gained over the course of the last 18 months, Ainge and Co. are expecting bigger things.

"Avery is our best athletic perimeter defender," said Ainge. "He’s young without experience, so he has to learn to use that athleticism. But he’s also very intense kid, a little bit like Delonte [West]. He’s athletic, strong, and intense, and he has a ton of energy. Once he learns to bridle that energy, he could be one of the best defenders in the league."

The Celtics are also hoping he can develop on the offensive end. Rivers has expressed an interest in utilizing him exclusively at the shooting guard position behind Ray Allen, believing that, by not being forced to handle the ball (veteran Keyon Dooling can do that behind Rajon Rondo), Bradley's natural scoring abilities will take over.

Bradley, who admitted to being a bit skittish even during practices last season, has displayed no such hesitation this year, according to Rivers.

"Avery never has a problem shooting, that’s the one thing with Avery," said Rivers. "With Avery, we just have to get him to play at the right speed."

Forget the speed, just playing will get the ball rolling. The Celtics don't have a heck of a lot of depth behind Allen (rookie E'Twaun Moore is also in the mix), which could further force Boston to lean on its youngsters. If Ainge is correct, the Celtics will be rewarded for that investment.