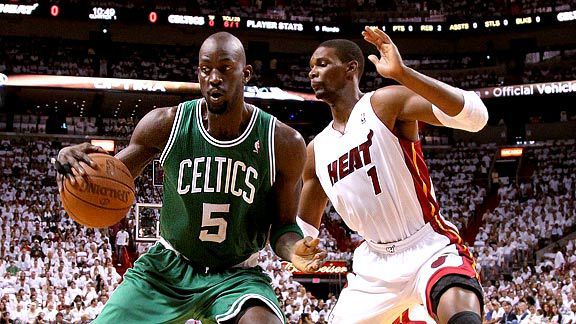 Expect to see a lot of this Tuesday night: Kevin Garnett posting against Chris Bosh.MIAMI -- Celtics coach Doc Rivers exaggerated (but only slightly) when he suggested Tuesday morning that the Celtics didn't engage in a single offensive post-up during Sunday's season-opening loss to the New York Knicks.

According to Synergy Sports data, the Celtics posted on a mere four possessions which resulted in two measley points (Chris Wilcox used a little dribble move to generate a jumper in the first quarter). Only three more times did the Celtics end a possession (shot, turnover, or free throws generated) in the post, turning the ball over once (Kevin Garnett) and missing two other shot attempts (Garnett, Jermaine O'Neal).

Even by ignoring one of the most surefire way to generate points, the Celtics still put up 104 points against the Knicks, which is the only reason Rivers wasn't irate about the situation.

"We had zero posts for a game, for the most part," said an incredulous Rivers. "That was for everybody. That was [Rajon] Rondo on the post, Kevin on the post, J.O. on the post, Marquis [Daniels] -- and that’s what he does. We had zero post-ups. Those are the things you saw [on film] that you didn’t like -- but you do like. We scored 104 points and I’m telling you, we had zero post-ups. I think that’s a record. I mean, that’s impossible. I don’t even know if you can go through a game without a post-up, and we did it. And did it well. We didn’t even look there. That’s something we have to improve on."

The Celtics have made it a point of emphasis in the past to try to get Garnett touches in the post, particularly in the postseason, including last year against the Heat. Expect to see a renewed emphasis there Tuesday, but Rivers clearly wants the entire team touching the ball near the blocks moving forward.

The conversation at the Celtics' shootaround Tuesday morning spawned, in part, from Rivers gushing about LeBron James, including his newfound emphasis on posting more this season. James alone accounted for six of Miami's 16 post-up possessions in a season-opening win over the Mavericks. What's more, James scored 10 points alone off post-up situations in that game.