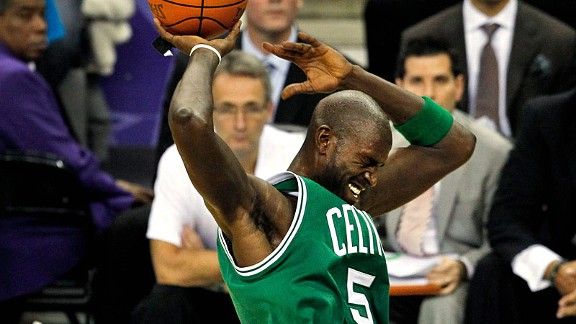 The play of the Celtics defense is enough to make Kevin Garnett wince.Yes, Paul Pierce is out, but is that the only reason Boston is 0-3? ESPN.com's John Hollinger examines the Celtics' defensive struggles in his PER Diem

We were warned that this would not be a great season to have an old roster, and early returns have reinforced that trend. Veteran clubs in Boston, L.A., Dallas and Phoenix have struggled mightily, going a combined 1-9 and looking worse than their record; among the older crowd, only San Antonio has shown its usual mojo.

We're only four days into the season, so the usual caveats apply, but watching Boston's game in New Orleans on Wednesday night had me wondering about Boston in particular. It wasn't just that the Celtics lost by 18 points to a team expected to finish near the bottom of the Western Conference; it was that they didn't particularly look like the Celtics along the way.

For half a decade, this team has built itself around a defensive identity. They clog the lane, force extra passes, deny second shots and make opponents beat them with deep shooting. Or rather, they used to do all that stuff. Because Wednesday night's 97-79 loss to New Orleans was part of a larger, disturbing trend through three games.

To review, the Hornets are not a good offensive team, and they were missing their best scorer. In their previous game they scored 85 points in 90 trips against a Phoenix team that nobody has confused with the Jordan Bulls.

Yet against the Celtics the Hornets rolled to 97 points in the same 90 trips; a guy named Squeaky even got on the board. More troubling than the result was how it was accomplished. It would be one thing if the Hornets had shot unsustainably well on 3s, or made a bunch of crazy shots, or got some other fluky breaks.

None of those things happened. New Orleans was 4-for-12 from the arc and 13-for-31 on 2-point jumpers beyond 10 feet; if anything, they could have done a bit better from the perimeter. This didn't matter, alas, because the Hornets got so many easy looks close to the rim. New Orleans didn't need to swing the ball or design elaborate plays or do anything else out of the ordinary; trip after trip, they found easy shots with their first option. Boston's once-ironclad defense was utterly befuddled by the pick-and-roll combination of Jarrett Jack and Carl Landry.

to read the full story. A little more from Hollinger after the jump:

We might be able to dismiss this as just one bad night were it not for the two bad nights that preceded it. I'd had the same reaction seeing this team against the Knicks on Christmas Day, but wondered if the distractions of hors d'oeuvres, cookies and adorable nieces had clouded my thinking. Apparently not. Boston gave up 34 points in the first quarter and 106 for the game to a Knicks team that is probably pretty good but somewhere south of invincible.

And sorry, Boston; it's not the refs, either. Just stop it.

Through three games, the Celtics are 27th in Defensive Efficiency, and when you dig deeper it's an ugly 27th. Boston's opponents are shooting 49.6 percent from the floor; only Houston is worse, and the Rockets have only played one game.

They can't defend without fouling, either, as too many opponents are getting the ball at or near the rim and forcing desperate measures from the Boston defense. Celtics' opponents average .494 free throw attempts per field goal attempt through three games; only Dallas and Milwaukee have been worse. Boston fans aren't used to seeing all these whistles, but the simple reason is that opponents are getting the ball in much better positions than before.

Even the Celtics' good stats are bad. Boston opponents have only tried 14 3-pointers per game, the league's fifth-lowest rate. Why bother when it's so easy to get layups and free throws?

For those looking for any bit of optimism, Hollinger notes that Paul Pierce's return will aid the team. But he closes by noting: "Nonetheless, the Celtics' hopes of contending for anything important this season were pinned on their having an elite-caliber defense. Thus far, they couldn't possibly be any further from that standard, and as a result the Atlantic Division race looks wide-open."