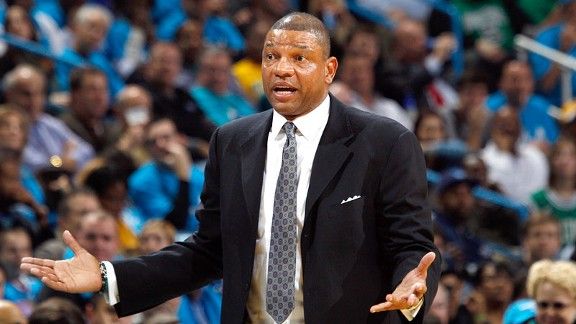 Rest easy, Doc, the schedule gets easier from here.Sure, the Celtics have their problems, but nothing a friendlier schedule and Paul Pierce can't fix:

So here, then, is one reason not to get overly despondent about the Celtics' current state of affairs: the schedule. It is their BFF -- at least for the next six weeks (don't even look at March or April without a pail nearby).

The Celtics' next five games are against Detroit, Washington (back-to-back, home-and-away), New Jersey and Indiana. The only road game is the New Year's night affair in Washington. They should be no worse than 4-4 at that point and really should be 5-3. Even better for the Celtics, after their game against Indiana on Jan. 6, they do not play again until Jan. 11.

That stretch of no games in five days is a veritable mother lode for Rivers and his staff, if for no other reason than it may provide them with their first days of practice since the start of the season. The stretch will (hopefully) give Mickael Pietrus time to integrate with his new team. It will (hopefully) give Paul Pierce time to integrate with his old team. It will (definitely) give those who need a rest some time to actually get some downtime. (Right now, that looks like everyone but JaJuan Johnson and E'Twaun Moore.)

Wait, there's more. Starting with Friday's game against Detroit, the Celtics play 19 of their next 25 at home. If they can't right the ship with a favorable stretch like that, a period that includes nine games against Washington, Toronto, Cleveland and (I know they're better, but ... ) the Pacers, then everyone should just bookmark Chad Ford's 2012 Mock Draft as your home page and start watching college games. There are some really good games in that stretch as well, all at home (Chicago, Dallas, Oklahoma City, Orlando and the Lakers.)