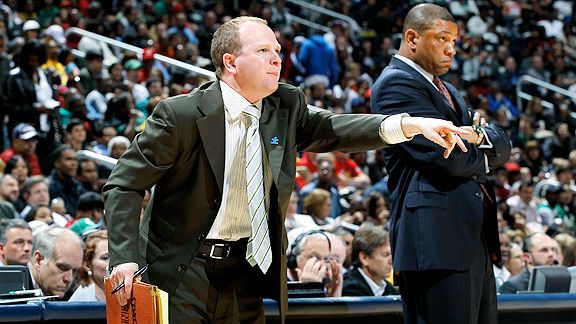 Lawrence Frank and Doc Rivers will be on opposite sides on Friday night.We're trying something a little different this year to get you geared up for gamedays. Before each contest, we'll play a little game of 3-on-3 discussing the hot topics around the Celtics and looking ahead at the next opponent.

The Celtics host the Detroit Pistons on Friday night in their home-opener at the TD Garden (7:30 p.m., CSN). I'm joined by ESPN Boston intern Greg Payne and CelticsHub's Brian Robb. Let's play a little 3-on-3:

1. The Pistons? Home-opener? The Celtics can't lose this one, right?

Payne: The Celtics will finally grab their first win of the season tonight, prompting the biggest collective sigh among Celtics fans since the NBA vetoed the Chris Paul trade to the Lakers. I'm expecting a bounce-back effort from the team overall, but mainly from Rajon Rondo in particular. I can't imagine getting torched by Jarrett Jack is sitting very well with him right now, and if he carves up Detroit's defense, he'll have bragging rights over former Celtics assistant coach Lawrence Frank, who's now calling the shots for the Pistons. In addition, don't be shocked if the second unit propels the Celtics ahead of Detroit, rather than contributing to another significant deficit the way it did against the Hornets.

Robb: I would like to say they can't, but there are no guarantees here, especially if the C's are still waiting on Paul Pierce's bruised right heel to recover. The Celtics will be hungry and facing a team with inferior talent, but the problem is the Pistons are desperate too as they search for their first win, so this will not be a walkover. The familiar confines of the TD Garden should work wonders however, as will the return of some semblance of Boston's top-five defense from past years, which I refuse to think has dropped off a cliff this quickly. It won't be pretty overall but expect Boston's first win of the 2011-12 campaign.

Forsberg: Tonight's game goes one of two ways: 1) The most likely scenario sees a rollicking Garden give the Celtics a little spark early on and Boston produces its first quality (and sustained) start of the season while racing to a comfortable lead on the Pistons. I'm not saying we'll see Gino, but it aids a win, or 2) Far less likely, but the Celtics could come out sluggish yet again, fall behind Detroit early, and out come the boo birds. I'm not saying they lose even if that happens, but, you know, just brace yourself if they don't have Pierce.

2. How much will the Celtics miss Lawrence Frank this season?

Payne: I don't think it ever helps a team to lose a very intelligent basketball mind (particularly a defensive-minded one) like Frank's, but even if he still was sitting next to Doc Rivers on the sideline, any defensive schemes he would have developed would have only been successful with the right personnel. So far, Jermaine O'Neal hasn't been a reliable defensive player, and even Kevin Garnett hasn't been as dependable on the back line as in years past (granted, it's only been three games). Bottom line: If the Celtics see a significant drop-off in their defensive efficiency compared to recent seasons, it'll be because Father Time finally walked through that door and not because Franks' manning another locker room.

Robb: They will miss him a good deal, but his absence is not a reason for the C's early decline. With the C's ranking 27th in defensive efficiency, a lot of eyes have turned to the bench in search for reasons for the massive dropoff. And while having Frank around certainly wouldn't have hurt matters, I believe a host of new bench talent combined with a quick training camp has left the C's in a bit of a rut in the early going. Frank's a terrific basketball mind but, by and large, the team's defensive schemes haven't changed, they just need to be executed better. That's on the players, not Frank's replacements.

Forsberg: Let's put it this way: Good thing this defensive drop-off didn't happen at the start of last year year when Tom Thiobdeau left, or we would have all been suggesting he took his defensive wizardry with him. Now we know better. Frank did an excellent job while here and required the Celtics to maintain their defensive excellent. But not sure either Thibs or Frank could have prevented what's happened thus far. And it'd be unfair to blame any of Doc Rivers' current assistants for their early season struggles. This is on the players. The Celtics loved Frank, but his departure won't be a significant issue in how successful this season is.

3. Fact or fiction: J.O. is the team's starting center at season's end?

Payne: Fiction. O'Neal's been one of the team's least productive players through the first three games, and right now, opposing offenses have no fear when they attack the rim against Boston's interior defense. While having someone who can completely snuff out opponents' opportunities around the rim would be a huge bonus, the Celtics will settle for someone who, at the very least, will be active. Right now, Greg Stiemsma's that guy and if he comes close to playing the way he played against New Orleans on a consistent basis, he could be a viable candidate for a starting gig. Also, don't be shocked if Celtics GM Danny Ainge attempts to bring in another 7-footer to stick in the middle if things don't improve over the next several games.

Robb: Fact. He may only be playing 15 minutes a game by the time this season is over, but I don't think he will get the yank from the starting five, barring some massive wheeling and dealing by Ainge at the trade deadline. O'Neal has regressed considerably, but I refuse to believe he will struggle as much as he's had over the first three games. If there was a viable alternative on the bench (Greg Steimsma isn't there... yet) that'd be one thing, but for now Doc Rivers will continue to try to prop up the training camp MVP in hopes he can begin to give Boston something, especially on the defensive end. Look for some improvement against a subpar Pistons front line this evening.

Forsberg: Fiction. Though it has little to do with his slow start. I simply wonder if O'Neal can help this team more off the bench, especially as he continues to hint about wanting more offensive touches. Well, the second unit needs more offense, so maybe it's a better fit to put him out there with the reserves and see if they can rekindle him a bit by making the ball go through him more than he'll see it with the first unit. Not sure Stiemsma's the answer as a starter -- nor is Brandon Bass who should absolutely remain the team's sixth man by spelling at both the 4 and 5 -- but maybe we see a situation where the Celtics add a serviceable big man down the road (say, once Pierce and Pietrus are healthy and some wing depth can be trimmed).