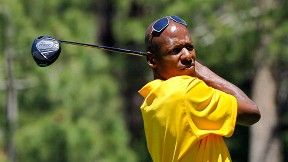 Celtics guard Ray Allen finds time for work and play during his offseasons.BOSTON -- Ray Allen did his best to not let the NBA lockout hinder his offseason conditioning plan.

Regarded as one of the NBA's most in-shape players, Allen's rigorous offseason routine has often set him apart from his NBA counterparts, and continues to help him perform well into his 30s. But for most players, it's the promise of a new season that will keep them in the gym throughout the offseason months. This time around, though, without the guarantee of being able to put those extra summer hours to good use during games, many players chose to neglect them completely.

Allen, though -- to no one's real surprise -- was able to fight off the urges to take it easy.

"There were those mental tug-of-wars that I had with myself," Allen admitted after Friday's 96-85 win over the Pistons. "You know, you're getting bad news, the season's not going to start, and you just kind of, in your mind you say, 'Well, maybe I'll just lay back more than I used to.' But, my lifestyle, what I try to create, is just a habit of just always working out. Part of your day, like, even if I wasn't playing basketball, I'd go work out or do something that's going to make my body better that particular day, so I tried not to equate what was going on. Just kind of saying, 'Just take care of yourself. Make sure you take care of your body.' You go to the grocery store, you go to the magazine aisle, you see all these guys and girls buff on the front of the magazine and that's always encouragement. So, I said, 'I have a ways to go,' but at least it's on my mind."

Allen's commitment to his offseason workouts, despite being unclear as to when the season would start, has so far paid off. Through four games, he's been the Celtics' leading scorer and most consistent offensive player, averaging 20 points per game on 58.1 percent shooting from the field and 58.3 percent shooting from three-point nation (he hasn't missed any of his 16 free throw attempts, either).

Celtics coach Doc Rivers knows it all relates back to Allen's offseason habits, which he continues to be marveled by.

"I don’t know where he gets it from," said Rivers. "He golfs all day during the summer. But he still gets [the workouts in]. He does what he wants to do, but he’ll still go into the gym. He’ll play 36 [holes of golf] and still go to the gym, because he knows that’s his job. A lot of the younger guys, they’d [do some activity] and they would say, 'I'm taking the day off because I'm tired.' Ray doesn't do that. 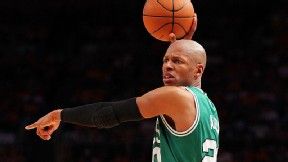 Ray Allen directs the offense.Some of Allen's motivation stems from past experience. During the 1998-99 lockout, Allen was able to see firsthand just how many players lumbered into the 50-game season out of basketball shape. Those observations factored into his desire to bring a no-excuses mindset to his workout regimen this past summer.

"When I went through this back in '99, I saw all the guys that came in out of shape," Allen explained. "That's just all I thought about when I worked out. And I was like, 'Don't be that guy,' because everybody's like, 'You're one of the older guys.' You come back in and you're not in shape, they're going to expect that from you, and I was like, 'I'm going to be on the other side of that,' because, what I did, working out-wise, I knew nobody did what I did. And so, it's like pushing yourself, because, if I'm not playing, I'd still be working out and if the season doesn't start, I'm thinking to myself, 'It's November, and we would be playing, typically.' So, instead of me sitting at home, I'd just put it into the equation like, 'I should be in the gym right now. Every day.' And that's kind of how I kept pushing forward."

For Allen, even with the season on the ropes, his desire to improve never evaporated.

"You never let go of that feeling of, 'I have more to do. I have to get better. I have to improve some of the things I'm doing out here,'" he said. "So, it's a good start."