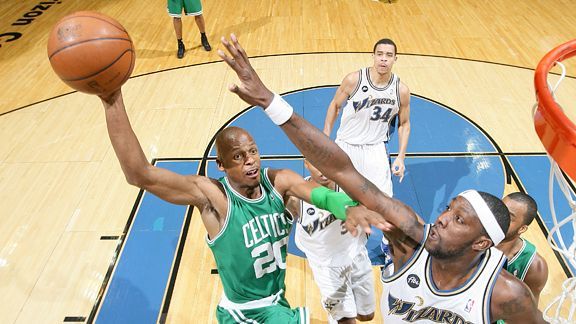 Ray Allen drives at the rim against the Washington Wizards.The Celtics start the new calendar year in the nation's capital Sunday evening visiting the Washington Wizards in the front end of a home-and-home. For today's game preview, I'm joined by ESPN Boston's Greg Payne and CelticsHub's Ryan DeGama. Let's play a little 3-on-3:

1. How encouraged should we be after Friday's win over the Pistons?

Payne: I think there's cause for optimism following Friday's win. Paul Pierce reacclimated himself very well, and the defense in the second half was the best we've seen all season. I think it's most important for the C's to carry that defensive momentum into Sunday's game, as they still aren't quite clicking on all fronts just yet. Things are certainly improving, but I think we can still see better execution defensively from the bench, and that will continue to develop as the unit plays more games together and finally gets some practice time over these next few weeks.

DeGama: Beating a terribly constructed Pistons team is hardly call for a parade, but Boston played actual NBA-quality defense for the first time this season against Detroit. And while we’re really just watching an extended training camp, as trends go, the Celtics’ offensive renewal is heartening. Boston’s offense registered a 115.7 offensive rating Friday night, without much of a contribution from Kevin Garnett. This, more than anything else, is cause for optimism.

Forsberg: When you're 0-3, a win is a win is a win. Just like the Celtics shouldn't lament a tough schedule to start the year, they shouldn't have to justify victories against the weak sisters of the league. That said, we all know that Pistons game should have been a bit breezier. None of the starters should have been back on the floor after the third quarter, but coach Doc Rivers doesn't seem ready to trust his bench -- especially the younger players -- to hold even double-digits leads. That's concerning because the veterans need rest, even this early in the season, and the new faces need extended court time to build confidence. Bottom line: The panic meter dipped (at least for now), so the win must have been encouraging.

2. Fact or fiction: Paul Pierce is the most important member of the Big 3.

Payne: Fiction, but only because I think it's impossible to distinguish which of the three is the most important. As crucial as Pierce and Ray Allen are to the offense, we all know Kevin Garnett is equally, if not more, vital on the defensive end. We saw through the first three games how out of sync the C's looked on offense at times without Pierce, and we saw during the 2009 postseason how different things were without Garnett around. In my eyes, it's the balance between the three players that gives them their ultimate value as a whole.

DeGama: Fact. The 2008 answer to this question, Kevin Garnett, now comes in second as a result of his withering offensive game. Pierce has also declined, but he remains Boston’s most critical and complete scorer, an impact defender and locked in a dead heat with KG as the team’s most emphatic leader. Want some small sample size support? Even without any real practice or game run, Pierce put up a ridiculous 28.77 PER against the Pistons.

Forsberg: Fact. Somewhere along the line KG passed the torch to Pierce and the numbers back it up. The Celtics are a sub-.500 team when Pierce is out (9-10 in Big Three era), while Boston still owns a .659 winning percentage when either Garnett (48-27) or Allen (12-4) is out. You can make the case that KG's defense is essential to the team's championship hopes and we'll always undervalue what Allen brings to this team offensively, but Pierce is the captain for a reason and his all-around contributions -- mixed with all the intangibles -- make him the most important member of the group.

3. Give me one reason the Celtics should be worried about the Wizards.

Payne: Despite their 0-3 start (Celtics fans know how that feels), the Wizards still boast young, athletic talent and could give the Celtics fits if they're able to hang around. JaVale McGee, while not a polished offensive player, still could wreak havoc inside with his leaping ability, and John Wall, Rashard Lewis, Jordan Crawford and Nick Young all can score in bunches. This will be another test for the Celtics, both defensively and mentally. They can't afford to take lesser teams lightly.

DeGama: Because the Celtics can lose to any team at any time, a lesson we’ve learned repeatedly over the last few regular seasons. Because Rajon Rondo can get too up for games against other star point guards and play out of control. Because Andray Blatche and JaVale McGee are long and athletic enough to cause major problems for Garnett and Jermaine O’Neal in the paint. Ugh. That’s three. Now I’m worried.

Forsberg: You've seen Boston's interior defense through four games, no? Any amount of athleticism around the basket should scare the bejesus out of Celtics fans at the moment and, while the Wizards rank 30th in the league in points per games (82.7), Blatche and McGee could have a field day if Boston doesn't tighten up around the basket (watch out for early fouls). As much as they've struggled in recent years, the Wizards are desperate for their first win, and that makes any team dangerous.