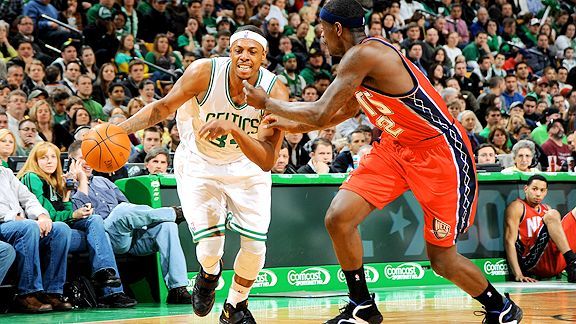 Paul Pierce and the Celtics host Anthony Morrow and the Nets on Wednesday night at TD Garden.The Boston Celtics (3-3, 2-0 home) carry a three-game winning streak into Wednesday's contest against the New Jersey Nets (1-5, 1-3 away) at TD Garden (7:30 p.m., CSN). ESPN Boston's Greg Payne and CelticsHub's Brian Robb join me today to play a little 3-on-3 in advance of this Atlantic Division matchup:

1. Shelden Williams is a starter?! Give me a reason to fear the Nets.

Payne: Right now, with Brook Lopez out with a broken foot, there aren't many. The Nets currently rank second-to-last in the NBA in defensive efficiency (it's still early in the season, though), and don't have too much offensive firepower right now besides Deron Williams and Marshon Brooks. But I suppose the Nets should be feared because they're the type of team the Celtics, historically, have played down to, often jeopardizing a win in the process.

Robb: Even with both Deron Williams (ribs) and Kris Humphries (shoulder) expected to sit out tonight's game? I'm still a bit concerned about the Nets, to be honest, as this opponent could highlight the truth about this C's team. What "truth" is that? Boston playing down to its competition, even at home, has been the rule rather than the exception for much of the past couple of seasons. While I still fully expect Boston to win tonight, there are plenty of capable NBA players on the Nets roster that can make it tough on the C's. Boston needs to pounce early and avoid the sloppy play on both ends that plagued them against the Wizards on Monday night.

Forsberg: THIS sums it up for the Nets at the moment, right? (Both the injuries and the photo of old friend Shelden). Even after all the Dwight Howard chatter fizzled, we all probably expected New Jersey to be a little better this year and they're just not (not yet, anyway, though injuries certainly haven't helped matters). It's one thing to be without Lopez, but to now be without both Deron Williams and Humphries -- yikes, that's a tough draw. Absolutely no reason the Celtics shouldn't win -- and win easy -- Wednesday night (even though you guys are probably right in expecting another grind).

2. Fact or fiction: The C's should have kept 25th pick Marshon Brooks.

Payne: Fiction. I think right now it's easy to say the Celtics should have held on to Brooks, given that he's been one of New Jersey's top offensive players this season. I think it's easy to get excited over a first-year swingman like Brooks who puts up points in a hurry, but we've yet to see Johnson garner substantial minutes, so I think it's best to say the jury is still out. The real reason JaJuan Johnson hasn't played much this season is because he has two very productive forwards in front of him in Kevin Garnett and Brandon Bass. Sure, Brooks, overall, seems to have adapted to the NBA game better, but Johnson needs some time on the floor before we can make this assessment.

Robb: Fiction. It's easy to heap praise upon one of the top scorers for a rudderless one-win team just two weeks into the NBA season. Brooks has been a terrific surprise so far, but he also would likely still be riding the pine, just like Johnson is right now if he were in Boston, waiting for his chance. Coach Doc Rivers doesn't go easy on his rookies, as we all know (unless they are 7-foot shot blockers), so I'll wait for Johnson to get a real opportunity before putting Brooks ahead of him.

Forsberg: Fiction. The Celtics couldn't have known they were going to add the likes of Brandon Bass and Chris Wilcox. There was actually a chance Johnson might have been Kevin Garnett's top backup if the offseason unfolded differently. You don't draft for need, you draft the best available talent (and adding a future second-round pick to drop down was a nice perk). In the long haul, my gut says Johnson should be the better pro, especially learning now under KG -- it's simply frustrating for Celtics fans because Boston has such a glaring need at backup shooting guard and Brooks has made an immediate impact (while Johnson can't get off the bench early in his rookie season).

Payne: Injuries/general fatigue. I feel like in years past, the C's were better built for a loss of any of their more valuable players. This year, if Kevin Garnett, Ray Allen, Paul Pierce or Rajon Rondo go down for a significant stretch of time, I don't think the C's will fare too well in either the short term or the long term. We've already seen how things went without Pierce for three games. In addition, it's going to be a very physically-demanding season, and I know Boston is content brushing away the notion that it's merely something to be dealt with, but I think this team will be more affected than others.

Robb: The defense. We've seen improvement over the three-game winning streak, but the C's are still fouling at disturbing levels, as well as failing to force high numbers of turnovers like they did as recently as last season. I still refuse to believe the D has regressed that much so suddenly, but a fall to the middle of the NBA pack may be looming unless the C's step up the rotations and pressure on the defensive end.

Forsberg: Execution in critical moments. Good teams find a way to compete when things are going bad; great teams find a way to win those games. And in the first two matchups of the season -- really Boston's only games against playoff-caliber squads -- the Celtics valiantly rallied against the Knicks and Heat, but faltered in crunch time. That's simply not an encouraging sign for this team's overall potential. It might come in time and we might see the familiar signs of a team that thrives when, as Rasheed Wallace used to brashly note, buttocks get tight. That's what used to set the Celtics apart from their competition.