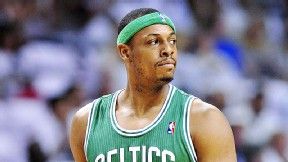 Paul Pierce is still working his way back from a bruised right heel.BOSTON -- Celtics captain Paul Pierce admitted after Monday's win over the Washington Wizards that he's still only about 80 percent healthy and, having missed nearly all of training camp, he's still fighting to get both his body and game where he wants them to be.

"I'm probably at like 80 percent, as far as the foot is concerned," said Pierce, who missed the first three games of the season with a bruised right heel. "I still have to get my treatment, there’s still some bruising in the foot. I have to wear a lot of padding in my shoes -- it’s coming along, but I’m feeling more confident in it. I’m not even thinking about it and that’s the good part."

What Pierce is thinking about is his game shape and being able to get up and down the floor like he's accustomed to.

"It’s about the basketball shape, the timing with the unit, getting a rhythm, being able to understand the pace of the game, those little things, that all comes into play," he said. "When you’re just thrown out there and winging it, it’s hard. As good as I’ve been over my career, you still need practice."

Pierce and the Celtics are scheduled to have their first honest-to-goodness team practice since training camp ended on Thursday. He thinks that could go a long way towards helping everyone on the team -- veterans and new faces alike. Until he gets his basketball legs back under him, Pierce said the key is simply finding an early rhythm on the floor and not getting overanxious.

“I'm still trying to get my in-game shape legs," he said. "After the firs quarter [on Monday night], I sort of got into a good rhythm. But I gotta do a better job of starting off the games better... Mentally, I know I just need to just slow down, I think I’m rushing things a bit. It’s hurting our team when I come out early and I turn the ball over, when I shoot airballs, and stuff like that, or miss defensive assignments. I just need to slow down and focus on just doing the right things instead of rushing them."