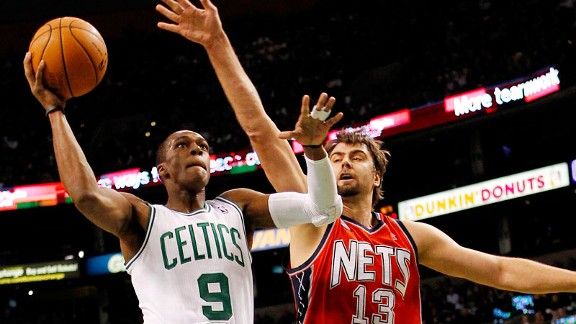 It wasn't very pretty, but Rajon Rondo and the Celtics got past the Nets.BOSTON -- Rapid reaction after the Boston Celtics defeated the New Jersey Nets 89-70 Wednesday night at TD Garden:

Paul Pierce scored a game-high 24 points on 8-of-14 shooting with 6 rebounds and 5 assists over 29 minutes, while Brandon Bass kicked in 15 points on 7-of-10 shooting with 13 rebounds over 26 minutes to spark the Celtics after a super sluggish start without Ray Allen (flu). Kevin Garnett added an efficient double-double (14 points, 12 rebounds) and Avery Bradley chipped in 11 points in one of his best all-around games as a pro.

The first 30 minutes involved some frighteningly ugly basketball, but the Celtics closed out the third quarter on a 16-3 burst to run away with this one. Bass and Pierce did the majority of the damage with the captain burying a pair of 3-pointers to help ignite the run. Bradley produced his first NBA 3-pointer to give the Celtics a 13-point cushion and brought out the loudest cheers of the night soon after with some feisty defense that forced a Jordan Farmar turnover. The Celtics led by 16 (63-47) at the end of the third and coasted to the finish line.

Keyon Dooling, who earned the spot start in place of Allen, finished with a +18 plus/minus, showing just how well the team played with the starters on the floor. He finished with 5 points, including a big third-quarter 3-pointer.

Bradley put together one of his most impressive stretches as a pro to help fuel Boston's second-half separation. At one point, he poked the ball away from Farmar with some pressure defense, pursued the loose ball and managed to throw it off Farmar near the scorer's table to get Boston the ball back. The Garden crowd roared in appreciation, while Pierce stormed over and delivered an emphatic chest bump that knocked Bradley back a step (Dooling came over to offer his praise as well).

With a four-game winning streak, the Celtics climb above .500 for the first time this season. They've feasted on the weak sisters of the league (Wizards twice, Pistons and Nets), but wins are wins in a condensed season. Allen's absence clearly left the offense stagnant and shows just how brilliant he was over the first six games. Boston will get a much-needed practice Thursday -- its first real offday session since training camp -- and will get a better gauge of where it stands when the Indiana Pacers visit TD Garden on Friday night.