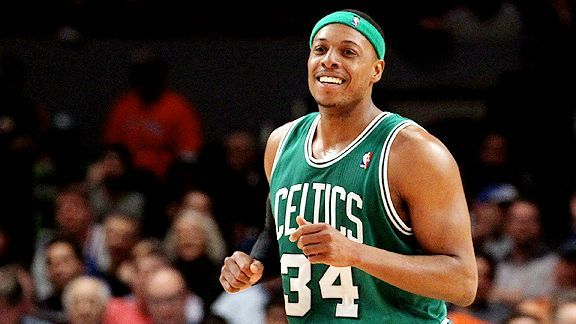 Slowed by injury out of the gates, Paul Pierce is returning to form.BOSTON -- It was only a matter of time before Paul Pierce began playing like Paul Pierce again.

The Celtics captain, marred by a right heel bruise that kept him out of the team's first three games, was steadily building his way back toward being the efficient scorer and playmaker he's expected to be, and he came close to crossing the unofficial threshold with an 8-of-14 shooting, 24-point effort in the Celtics' 89-70 victory over the injury-riddled New Jersey Nets on Wednesday.

It was a return to normalcy for Pierce, so much so that Rajon Rondo was quick to practically dismiss his performance as anything noteworthy.

But Pierce's performance on Wednesday did matter for a Boston team that was thoroughly lethargic on offense throughout the first half and trailed the Nets, 35-34, heading into the locker room at intermission. By that point, Pierce had already put in 13 points on 5-of-9 shooting while the rest of his teammates had combined to make just 8 of 24 shots (10 turnovers that New Jersey converted into seven easy points didn't help Boston's cause either.)

Pierce was crucial when all of that changed in the third quarter as the Celtics erupted for 29 points while holding the Nets to just 12. Pierce tallied 11 third-quarter points, including back-to-back 3-pointers midway through the frame that turned a five-point Boston lead into an 11-point advantage in the blink of an eye and capped off a 10-0 run.

It was the offensive spark the Celtics desperately needed, and Pierce happily delivered it.

The first 3-pointer came comfortably behind a giant-sized screen set by Brandon Bass -- who also played a crucial role in Boston's third-quarter surge -- while the second came on the left wing off of an assist by Bass.

"We just started executing," Pierce said of the third-quarter run. "We got out and ran a little bit, and we knew if we just kept it simple that we can push the lead. I think that's pretty much what we did. If the shot was there, we took it and if it wasn't we hit the open man and made the next pass, and we just ran our offense like we know we can. And it just works."

From a broader standpoint, Pierce's performance Wednesday was another important step as he continues to return to top form.

“Yeah, he’s pretty good," Rivers chuckled after the game. "He is. You can see it. He’s getting his rhythm. You know where he hasn’t gotten it yet and it’s coming is his 1-on-1 [isolation] game. You can see he’s -- I always tell guys, ‘When you miss a ton of games and don’t play, the ball-handling is the last to come.’ Because you can train all you want, [but] you don’t play at that speed in the summer. Then all of a sudden you’re trying to move your mind and your body is going, but your hands usually don’t work very well. But he’s getting it.”

Another thing Pierce got on Wednesday is additional rest -- something that can't hurt as he continues to nurse his heel back to full strength. Pierce didn't have to play a single minute in the fourth quarter, finishing at the 29-minute mark, which Rivers was pleased about.

“Yeah, he’d played too many minutes at that point anyway," said Rivers. "He was already at 29, I think, so I was going to not put him in no matter what the score was until the last five – if they had made a run. Because you’re really conscious of minutes. Especially with him, still. I mean, he’s still working his way back.”

The pace at which Pierce fully returns should quicken over the next few days as the Celtics will finally be able to get back on the practice floor -- a place Pierce has been largely absent from this entire season, which has unquestionably derailed his reintegration.

"It's going to be great for me, just to get sharp with some of the things I'm doing," Pierce said of the benefits of having practice on Thursday (and likely again next week). "Right now I've been kind of doing things on the fly, but I need more practice time, just to get in better shape, just to get more familiar with what we're doing on offense, and we haven't really been able to add a lot of plays in our playbook because I haven't been out there in practice, so that'll give us the opportunity to do those things, and hopefully prepping up for next week. Especially with this season, it's good to get those types of breaks, because I don't know if we'll get another break like that, probably until [the All-Star break]."