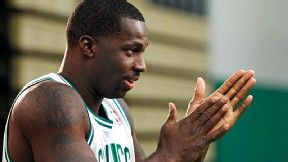 As good as Brandon Bass has been offensively, he's been even better defensively at times.WALTHAM, Mass. -- Celtics coach Doc Rivers admitted Thursday that newcomer Brandon Bass is still learning the team's help defense system, an adjustment that most new faces take time to grasp given the natural instinct to never leave your own assignment in man-to-man defense.

But Rivers was quick to point out that Bass might actually be one of the team's best one-on-one defenders because of his athleticism and the numbers are actually more startling than his offensive output to start the season.

But here's the real jaw-dropper. Defensively, Bass has allowed a mere 0.51 points per play (28 points on 55 defensive one-on-one situations). That ranks him in the 97th percentile in the league overall. Of players with at least 50 defensive plays, he is third in the league behind only Andrew Bogut (0.44) and Marcin Gortat (0.47).

Now part of Bass's success might be do to the fact that he's not sliding over in help situations, which will obviously lead to more baskets allowed (but it will also produce more stops overall for Boston by contesting more shots). Regardless, his stats through seven games on both sides of the ball are staggering in how good they are.

"[Bass is] already a very good individual defender," said Rivers. "If we told Brandon just guard his guy, he’d be terrific -- probably [one of the team's] best defensive bigs, because he can move his feet extremely well [and] he can switch on smaller players."

Rivers said where he wants to see improvement is simply Bass' ability to switch on help rotations.

"It’s not a concern, he’s going to get it," said Rivers. "It’s just going to take time. Chris [Wilcox] is behind a little bit, so a lot of that weak side help is late -- stuff like that. We’re just trying to get them to understand, guard your guy and the ball at the same time, if you want to simplify it. They are still into guarding their guy, especially on the weak side, but they’ll get there."

Bass said he loves playing with the Boston lineup on both ends of the court.

"I'm grateful to be a part of this group, man," he said. "To be able to play with Kevin Garnett, Paul [Pierce], Ray Allen, [Rajon] Rondo, I mean, ain't nobody worrying about me, man. You know, I'm flying under the radar, and I want it to stay like that, you know?"

So how does he feel about Pierce nominating him for the Sixth Man of the Year award already?

"How do I feel about all of that? Oh, man. You know, I don't know, bro," he said. "Like I said, I'm just going to try to take it day by day, man, and continue to improve and continue to help this team in any way I can."