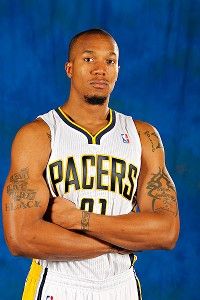 David West with the Pacers.BOSTON -- As David West stressed Friday that a rumored deal between him and Boston was never as close as media reports indicated, Ray Allen attempted to clarify comments he made that suggested he was disappointed in West's decision to sign with Indiana over Boston.

"Well, unfortunately, those comments were taken out of context," Allen said of an ESPN Boston story last month in which Allen told Jackie MacMullan he was "shocked" and "didn't understand" West's decision.

"I was speaking in generalities," added Allen. "By any means, I don't know what his situation is or was, and why he made his decision. I wasn't referring to him going for the money or whatever his ultimate decision was. When [the article] came out, it disappointed me because it almost seemed as though I was bashing him for a decision he made that's best for his family, and I reached out to [a mutual friend] and I said, 'Look, I read this article that somebody wrote about' -- and I had even seen it somewhere on NBA TV, and that's what kind of spawned me to read it. And when I read it I was really, really [upset] because, I don't have anything against David.

"It wasn't like he was like the final... piece of this puzzle. It was just a situation where, if we can work, we're going to try it. And I think in that conversation I had with that particular reporter, we were talking about, contractually, when guys are signing free agents -- because I went through the same process. Do you sign for more money? Do you sign for less? Sometimes you go after the money, sometimes you don't. Sometimes you put yourself in a situation where you take a lot less and you're on a somewhat better team, maybe not championship material. So, those comments were made to look like I was driving them towards him and his situation, and by no means was there any malice towards him and his situation with his family. Because, obviously, whatever he's going through and whatever decisions he makes is what's best for him. And when he made his decision, I said, 'Hey, it could have been great, but he made the decision that he saw fit for himself.'"

Allen, who noted he shares a private banker with West, said he had not talked to the Pacers forward about his comments.

"No, the interesting thing is I don't really know David all that well, aside from over this last month or so," said Allen. "I'm sure a lot of people have relationships with guys they brought on their teams or hope to bring on their teams through this shortened period of free agency and training camp. So, I really don't know him that well. Once he made his decision, it was business as usual. You've got to go and get ready and his decision... Because I've talked to numerous guys in their free agency and they haven't all decided to come play here. They're still playing in the league and you still chop it up with them whenever you can."