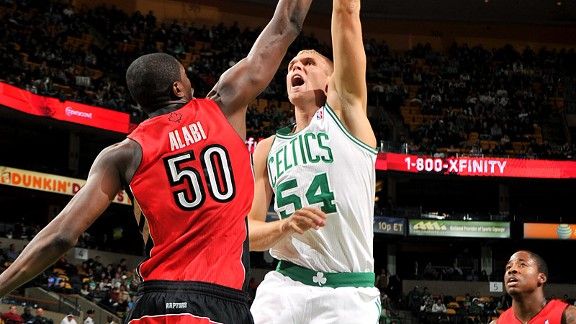 Greg Stiemsma has made a big impact on the Celtics in his short time with the team.WALTHAM, Mass. -- It only took six games into his NBA career before Greg Stiemsma started drawing comparisons to Bill Russell. Warranted or not (and Tommy Heinsohn might be jumping the gun a wee bit), it's clear the 26-year-old center has left an impression in a short amount of time in Boston, quickly becoming a fan favorite with his shot-blocking abilities.

But what's Stiemsma like away from the court? From watching Food Network to hunting during the offseason to wishing he could fly, Stiemsma opens up to ESPN Boston's Greg Payne in this week's edition of Outside the Paint.

What was the last movie you saw in theaters?

"Mission: Impossible 4, with the team."

What's the one TV show you recommend?

"I'm kind of a Food Network junkie, so there's a few good ones on there."

Out of all of the places you've lived so far, which has been your favorite?

"Boston [laughs]. No, actually, the second time in Turkey last year, in Ankara, wasn't too bad. Otherwise, Sioux Falls is like my second home, so kind of both of those."

How's the food in Turkey?

"It's not too bad. It's actually pretty normal. They have some American-style restaurants that we'd go to, so the food was good."

Do you have a non-American favorite dish?

"There's this stuff called iskender. It's kind of like gyro meat, on like the rotisserie thing, sliced up, like real thin, and put over this toasted pita bread, with tomato sauce on it, so that was pretty good."

Does American or Turkey have the better food?

What's your favorite thing to do when you're not playing basketball?

"Just kind of spending some time with family. We got a place on the lake this past summer, so I spend some time up there. Anything outside, fishing, hunting, any of that stuff. Being out on the boat."

If you could have one superpower, what would it be?