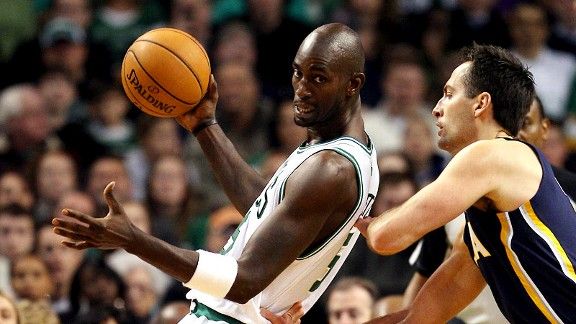 Kevin Garnett and the Celtics struggled to get going early vs. the Pacers and never caught up.BOSTON -- Rapid reaction after the Indiana Pacers defeated the Boston Celtics 87-74 Friday night at TD Garden:

The Pacers put six players in double figures, including a pair of reserves, paced by 15 points from Danny Granger (despite his 3-of-14 shooting). In fact, the only Indiana starter not in double figures was David West, the player the Celtics nearly acquired in a sign-and-trade last month, before he agreed to a two-year deal with the Pacers. Ray Allen, returning to the lineup after sitting out Wednesday's game due to illness, fueled Boston's lifeless offense, scoring a team-high 23 points on 7-of-11 shooting, including connecting on 4-of-5 trifectas. Paul Pierce had one of the most cringeworthy shooting efforts of his career, producing 10 points on 3-of-17 shooting, though he added seven rebounds, three assists, and a steal over 37 minutes.

The Celtics were down nine early in the third frame and four times trimmed to a one-possession game, but simply couldn't get over the hump. Nursing a two-point lead with 4:50 to go in the quarter, the Pacers embarked on a little 6-0 burst, fueled by a pair of jumpers by Darren Collison, to erase all the ground the Celtics had made up.

The Celtics matched a franchise record by scoring a mere 25 points in the first half. Boston was a mere 9-of-34 shooting overall (26.5 percent) and trailed by eight at the break. The Celtics erupted for 30 third-quarter points, but couldn't dent their deficit as the Pacers matched their output (aided by seven second-chance points in the frame). Boston shot a mere 39.4 percent overall (26 of 66).

The Celtics suffered their first home loss of the season and had their four-game winning streak snapped. Having feasted on the some of the league's weakest squads (Washington twice, Detroit, and New Jersey), the Celtics have now dropped three games to potential Eastern Conference playoff squads (Miami, New York, and Indiana). It's fair to be concerned, even if there's a long way to go before the postseason. Boston now endures a four-day break before its next game and will get some much, much, much-needed practice time before hosting the Mavericks on Wednesday night.