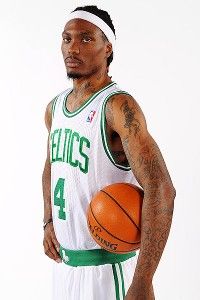 Celtics swingman Marquis Daniels.BOSTON -- Marquis Daniels is celebrating his 31st birthday Saturday. But his recent struggles on the court might detract from the festivities.

After an improbable return to the NBA court this season following offseason spine surgery, Daniels has slipped into a recent funk, connecting on just 7 of 32 attempts (21.9 percent) over the last six games. In fact, he's missed his last eight shots, including all seven attempts against the Nets on Wednesday. Daniels played only eight minutes in Friday's loss to the Pacers, looking uncertain at times of his shot, and misfiring on the only attempt of the night.

For his part, Celtics coach Doc Rivers doesn't seem overly concerned at the moment, noting how the offseason surgery and lack of a preseason has worked against Daniels. And asked about his 0-for night against the Nets, Rivers cracked, "He blew five layups the other night, so we did a layup drill [Friday morning] just for him."

Turning more serious, Rivers added, "He'll be OK. He's playing hard and he's trying to do things the right way. When you miss as many games as he missed [last season after the freak spine injury in February] and you don't have the luxury of a preseason, it's hard."

Daniels' offensive woes are impossible to ignore. According to Synergy Sports data, he is averaging a mere 0.571 points per play (a possession ending in shot attempt, turnover, or generated free throws). That ranks in just the 4th percentile league wide (and Synergy grades him out as "poor" thus far). Daniels typically thrives as a cutter, but the majority of his shots right now are coming in spot-up situations (which might just be an indication of the second unit's lack of continuity overall). All that said, the Celtics don't necessarily need much from Daniels offensively. He simply needs to get back to 2010-11 caliber defense.

Last season, Daniels graded out as one of the league's best defenders during his shortened campaign. This season, he's been solid, allowing 0.825 points per play, but that lands him in the 53rd percentile and Synergy grades him as merely "good." Daniels is struggling a bit in defending 1-on-1 situations, but you expect that could improve as he gets more comfortable on the floor.

Even with Mickael Pietrus nearing his Boston debut, Daniels is a valuable asset to Boston for his ability to play three positions, including a shooting guard spot that no one has really grasped the reserve role of behind Ray Allen. When healthy and productive, Daniels remains an impact player for the Celtics.