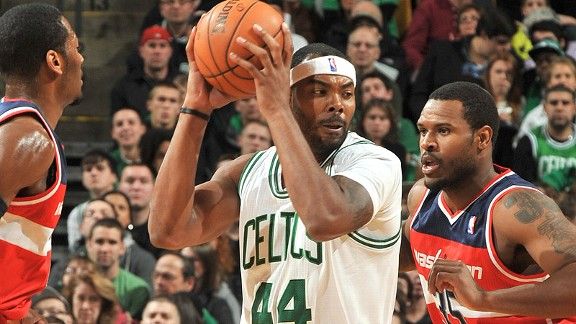 Celtics president of basketball operations Danny Ainge moved quickly to secure the services of forward Chris Wilcox, a nine-year veteran who seemed poised to flourish in a winning environment (despite playing for five different teams previously, Wilcox has never been to the postseason).

But it's been a slow start out of the gates for the former first-round pick (8th overall by the Los Angeles Clippers in the 2002 NBA draft). Wilcox is averaging a mere 1.4 points and 2.4 rebounds over 9 minutes per game in five appearances. In Friday's loss to the Indiana Pacers, Wilcox played a mere 2:55, didn't put up a shot, and finished with 1 point, 1 turnover, and 0 rebounds.

"I'm still trying to feel myself out, see where I'm at," said Wilcox. "The little injury I had kind of set me back, but, at the end of the day, no excuses. I gotta go out there and I gotta continue to play hard and I gotta find a way to contribute."

Wilcox played a season-high 14 minutes on Christmas Day in New York, chipping in four points, three rebounds, and a block, but suffered the shoulder injury two nights later during the first half of a loss in Miami.

In three games since returning, he's registered three points (taking only three shots) and six rebounds over 22 minutes. He admits he's looking for some sort of spark.

"Like I said, I have to give more than I'm giving right now."