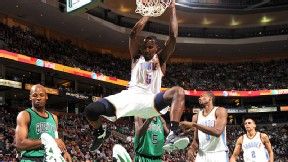 During the first television timeout in Monday's Boston Celtics-Oklahoma City Thunder matchup, Boston paid tribute to its former center with a minute-long video that culminated with a shot of Perkins hoisting the Larry O'Brien trophy inside a champagne-covered Celtics locker room in 2008 before three simple words appeared: "Thank you Perk."

Coming back onto the floor, with many players on both sides fixated on the screen, Perkins raised both hands to salute the TD Garden crowd as he was serenaded with a prolonged standing ovation.

But as he learned so harshly in February -- when he was dealt to Oklahoma City with Nate Robinson at the trade deadline in exchange for Jeff Green, Nenad Krstic and a future first-round draft pick -- this is a business and you have to leave your emotions on the sideline.

So as the crowd continued to roar, Perkins gave one final wave near midcourt, then walked toward where the action was set to resume, doing what he does best: barking at a referee about a previous foul call.

Welcome back, Perk. We missed you.