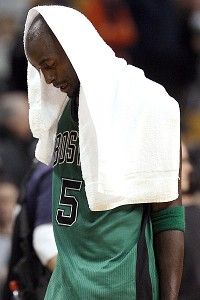 No, the factors behind Oklahoma City's league-leading start and the Celtics' limp to start the season are much deeper than just a role-playing, dirty-work center. Boston appears to be in the death throes of the Garnett-Allen-Pierce nucleus; we're not ready to read last rites just yet but the patient is definitely critical. That was going to be the case whether Perkins, O'Neal or Doc Rivers was the starting center. (O'Neal, for the record, badly outplayed his opposite number, with only his second double-double since becoming a Boston Celtic.)

It's hard to convince the Boston faithful of this fact, however, as Perk's trade was the line of demarcation for when the Celtics' old warehouses started showing their age. The TD Garden crowed gave Perk a long ovation in pregame introductions, and again when the Celtics showed a video tribute to his Boston years during the first timeout. (Side note: As a franchise, Boston remains one of the league's classiest acts.)

But let's face an honest truth: Perk can't fix what's wrong with Boston right now. He can't make the other players younger or the bench players capable of scoring or fix a score of other weaknesses.