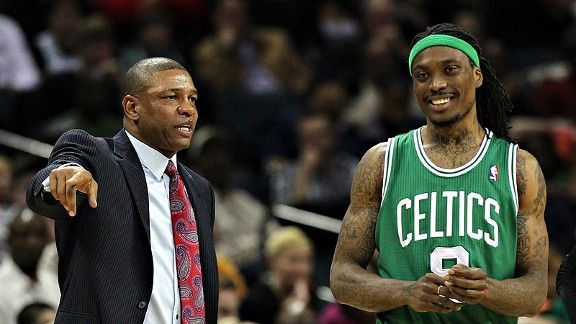 "[He told me] just be myself out there, just play," Daniels said following Boston's 97-88 loss to the Oklahoma City Thunder on Monday. "Go out there and play basketball. Stop thinking so much, and just play the game.

"He was basically just telling me what he wanted me to do more, to just stop thinking and just play basketball when I get out there. Just do what I'm capable of doing."

Rivers' focus over the last week has been all about his players reassuming the individual roles that will make themselves -- and ultimately his team -- successful. For Daniels, that meant getting back to his basics: Cutting to the basket, scoring in the paint, rebounding, and creating opportunities for his teammates. He garnered 12 minutes of action in Monday's loss -- his first stint of double-digit minutes since a home win over the Nets earlier this month -- and followed through on the conversation he had with his coach.

Daniels finished with four points and six rebounds, providing a small lift to his club as it was waning midway through the second quarter. Daniels scored all of his points and scooped up half of his rebounds in that frame, with his first basket knocking the Thunders' double-digit lead (27-17) back down to singles. Daniels grabbed a Daequan Cook miss and went coast to coast, weaving his way through the Thunder's transition defense, and put in a layup on the right side. Two minutes later, after missing a layup that was recovered by Jermaine O'Neal, Daniels hung around the basket on the right baseline and went in for another layup off of a feed from Brandon Bass.

His box score figures might not be overwhelming, but the brief flashes were a welcome return of the Daniels who is capable of impacting a basketball game in a variety of ways. For starters, he was back to initiating his offense close to the basket. And his ability to go unnoticed behind the defense along the baseline to generate easier baskets has always been a hallmark of his since coming to Boston.

"That's my game -- getting to the basket, trying to create for myself and others. Just being aggressive."

While consistent minutes are not guaranteed, Daniels understands the importance of always staying ready. And his ability to be effective in whatever minutes he is given will ultimately hinge on him playing to his strengths -- the ones he and Rivers discussed.

"I'm professional," said Daniels. "You've got to stay ready, regardless of the situation. If it's a minute, two minutes, you've got to be ready. You've got to go out there and perform."

Rivers made it a point to single out Daniels' effort after Monday's game and mentioned their chat. Rivers is hoping the two don't have another powwow any time soon.

"He promised me he’d never come back in my office this year," said Rivers. "I’m hoping [he won't]."