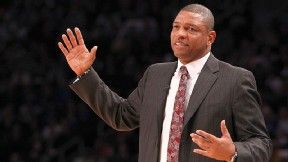 Celtics coach Doc Rivers and his team are still searching for answers to their early struggles.SORRY STATE OF AFFAIRS FOR CELTS

More than an hour had passed since the Boston Celtics fell to the Oklahoma City Thunder on Monday night before an apologetic Kevin Garnett emerged from the team's training room inside TD Garden.

Few doubt the Celtics will improve. Heck, it's hard to imagine them getting much worse. Boston is 4-8 and hasn't beaten a playoff-caliber team this season, its only wins coming against the Washington Wizards (twice), New Jersey Nets (without their two of their best players) and Detroit Pistons -- three Eastern Conference doormats with a combined record of 7-33.

During their five-game losing streak -- the longest of this Big Three era -- the Celtics have shown signs for encouragement, but the games have ended the same way: With a loss and, so far, empty promises to turn things around.