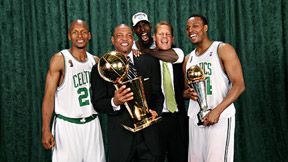 Danny Ainge, Doc Rivers, and the Big 3.Boston Celtics president of basketball operations Danny Ainge on Thursday shook his head over his comments about being willing to break up the Big Three if he felt it improved his team, saying he was simply stating the obvious.

“It’s almost like Mitt Romney answering the question about how much taxes he pays,” Ainge explained in his weekly interview on Boston sports radio station WEEI. “He says 15 percent in capital gains. And it becomes a huge story when he’s only stating the obvious. Some people don’t know the obvious. ...

“That’s how I feel with this. It’s obvious. They’re obvious things. Of course if we get the opportunity to make a trade that will help our team, we’ll do it.”

Ainge on Wednesday told the Boston Globe that he would not hesitate to trade away one of his Big Three – 34-year-old Paul Pierce, 35-year-old Kevin Garnett and 36-year-old Ray Allen -- if it meant acquiring a younger impact player that would improve the team.

The Celtics faced a similar situation in the early 1990s, when Larry Bird and Kevin McHale were at the tail end of their careers and Red Auerbach passed on a chance to trade them away for younger players. Ainge was also a part of that Celtics team and recalled the situation to the Globe.

“I sat with Red (Auerbach) during a Christmas party (in the 1990s),” Ainge said. "Red was talking to Larry, Kevin, and myself and there was a lot of trade discussion at the time, and Red actually shared some of the trade discussions. And I told Red, what are you doing? Why are you waiting?

"He had a chance to trade Larry (to Indiana) for Chuck Person and Herb Williams and (Steve) Stipanovich and he had a chance to trade Kevin (to Dallas) for Detlef Schrempf and Sam Perkins. I was like, 'Are you kidding?' I mean, I feel that way now. If I were presented with those kind of deals for our aging veterans, it's a done deal to continue the success."

Ainge explained Thursday that comparing Garnett, Pierce and Allen to Bird and McHale of the early 1990s was not a case of apples-to-apples.

Inferred in his comment was that this current Big Three is in much better condition than Bird and McHale were.

“I think that all of them (Garnett, Pierce and Allen) have basketball left in them, without question,” Ainge said. "Unlikely Larry, who had the double Achilles tendon surgery, and Kevin, who had screws in his feet, these guys have been fairly injury free. Haven’t had major reconstructive surgery on their bodies.”

Nevertheless, as long as the Celtics (5-9) continue to struggle, Ainge knows the rumors will be flying as to whether it will be in the Celtics’ best interest to trade one of them before the March 15 deadline if it will improve the team in the long run.

Ainge said the fact the team only had six players under contract at the start of an abbreviated training camp probably had something to do with the slow start, as did Pierce’s injury at the start of camp that has him playing games to try to get into shape. Still, he didn’t let the players totally off the hook.

"I wish they would have come into this season a little more prepared mentally, spiritually, physically, but they didn’t, so now we’re dealing with a bad start,” Ainge said.

“I do see a lot of pride in these guys, the commitment they have,” he said. “And I do see a great deal of hope in what these guys can provide because I watch them work each day. I see how hard they prepare for each game and how much they want to turn this thing around. They don’t like not playing well. It doesn’t suit those guys. It gives me hope.”