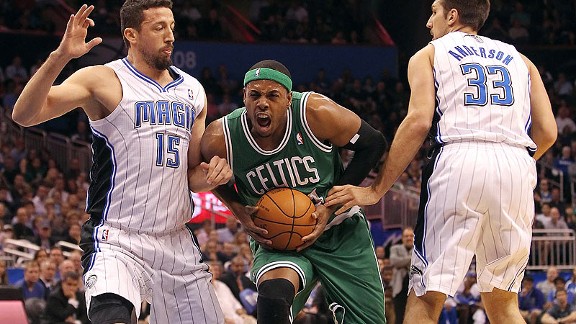 Paul Pierce and the Celtics produced an improbable comeback in Orlando.Rapid reaction after the Boston Celtics defeated the Orlando Magic 91-83 Thursday night at the Amway Center.

The Celtics trailed by as much as 27 in the second quarter (52-25, 3:11 to play), but outscored the Magic by 35 points over the final 27 minutes, overcoming the largest deficit in 16 seasons to sweep a home-and-home against Orlando. The Celtics trailed by 16 after one quarter (32-16) and 21 at the intermission (58-37). Unfazed, Boston trimmed 10 points off its deficit in the third quarter and kept its foot on the comeback accelerator in the fourth frame, opening the quarter on a 15-1 run to pull ahead, 79-76, on an E'Twaun Moore 3-pointer with 7:39 to play. Paul Pierce scored a team-high 24 points with 10 assists and 6 rebounds, while Kevin Garnett chipped in a double-double (12 points, 10 rebounds). Boston's defense limited the Magic to eight (eight!?) fourth-quarter points and just 25 points overall in the second half.

The Celtics seemingly expended so much energy rallying back, you couldn't help but wonder if they'd have anything left in the tank down the stretch. After pulling ahead, Boston actually went the next 2:49 without a bucket -- missing four shots and turning the ball over once -- but the Magic couldn't take advantage -- missing three shots and a pair of free throws (their only bucket coming on a Dwight Howard putback). Moore ended the lull with a driving layup and Bass added a 20-foot jumper soon after to push Boston's lead to five with 4:05 to go. Orlando further unraveled from there (two technicals) and never got closer than four the rest of the way.

Moore was 2-of-14 on 3-pointers entering Thursday's game. All he did was hit all four of the triples he put up, adding a key driving layup in the fourth quarter, while chipping in a career-high 16 points over 18 inspiring minutes. He finished a ridiculous plus-27 and really spearheaded the comeback effort with inspired play while running the offense. The Celtics don't win this game without the rookie second-round pick.

Back in the lineup after missing the last seven games, Keyon Dooling suffered a right hip-pointer during the second quarter and sat out the rest of the game. The Celtics were already playing without three starters in Jermaine O'Neal, Rajon Rondo, and Ray Allen. Read more HERE.

It's hard to put this one into words. An atrocious first half wiped out pretty much all the goodwill that Boston had generated with its defensive dominance in Monday's win over the Magic. But just when you were wondering if we'd see the rookies doing second-half mop-up duty, it was rookie Moore keying the comeback. The Celtics cranked up the defensive intensity and proved, yet again, to be kryptonite to Dwight Howard and the Magic. Boston now returns home for the second night of a back-to-back against an Indiana team that's given it fits this season. It will be interesting to see what Boston can do with the momentum of what's now a three-game winning streak, especially if it can get a couple starters back from injury.