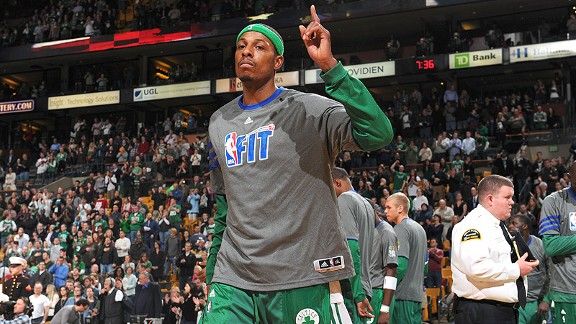 Back in game shape, captain Paul Pierce is carrying the Celtics lately.BOSTON -- In six games since Rajon Rondo injured his right wrist, Celtics captain Paul Pierce has had at least six assists per night, totaling 48 assists during that span. So how does the captain like playing the role of point forward?

"I'll play wherever they put me," he shrugged.

And that, in a nutshell, is what makes Pierce so valuable to the Celtics. Whatever the team is lacking, he's the one picking up the slack, often morphing his talents to fill a void.

“I have to make more plays now that Rondo’s out," he said. "Usually, I’m the recipient of a lot of Rondo’s passes, but with him out, I’m taking on some part in that role and it's just up to me to be responsible, to know when to find guys and have a balance on when to score.”

Since Rondo went down, Pierce has also averaged 20.8 points, 6 rebounds, 1.3 steals, and 1 block over 34.6 minutes per game. Boston is 5-1 over its last six games, the only loss coming in what might have been Pierce's quietest night of the stretch against Phoenix.

"I think we are riding Paul Pierce," said Brandon Bass. "He’s making plays for himself, and for us as well."

By now you know the story: Pierce missed all of training camp and the first three games of the season with a bruised heel. He struggled to get back into game shape, even after returning to the court, but has slowly inched his way back to the team-MVP level that we've come to expect from Pierce.

Earlier this week Kevin Garnett noted the "perfect" expectations that some put on Pierce, even as he tried to work his way back, lamenting how some wrote him (and the Celtics as a whole) off because of early season struggles.

Now, during a stretch in which the Celtics have played without as many as three starters, including Rajon Rondo, Ray Allen, and Jermaine O'Neal, it's been Pierce who has carried Boston (9-9) back to .500 and out of the grave that everyone tried to put them in after the early part of the season.

Even Pierce's teammates are marveling at what he's doing on the floor, elevating his all-around efforts even as he's waiting for his shot to come back.

"That man is a 10-time All-Star," said Mickael Pietrus, giving Pierce one additional All-Star berth than he's earned thus far, though another late February invitation could be coming soon considering his recent play.

"I would love to be Paul Pierce, but I’m Mickael Pietrus. He got hurt before training camp and he didn’t go to training camp. I’m happy to get Paul back, because it was hard for me to guard him [when Pietrus was] on the other team. I’m glad I’m his teammate. He’s Paul Pierce, he’s a 10-time All-Star, he knows how to play basketball. He’s been stepping up for us lately."

In particular, Pierce has turned the third quarter into his playground lately. He spearheaded Boston's improbable 27-point comeback in Orlando with his shooting Thursday, then stepped up and prevented Indiana from rallying ahead Friday night at TD Garden.

"I think he was a little upset the way we started out the third [quarter on Friday night] and we called a time out," explained coach Doc Rivers. "We were sloppy, we stopped executing, we got rejected twice in a row in pick-and-rolls. And that’s why I called that early timeout and some of that was Paul. I thought he took that to heart and then he showed great leadership. He went out and did everything right.”

Yes, Pierce is truly doing everything right at the moment. And just imagine what happens when his shot starts falling like it normally does.

More than anything, Pierce's ability to quarterback the offense has been remarkable. His assist percentage is up to a career-best 29.8 percent, putting him on the cusp of the top 20 in the league. Sure, it's not Rondo at 47.3 percent, second best in the NBA behind only Steve Nash, but it's impressive nevertheless from someone viewed as such an elite scorer.

Pierce often explains his increased efforts outside of scoring as "understanding what the game needs."

Given their recent success, it's not hard to understand what the Celtics needed -- just a healthy Pierce.