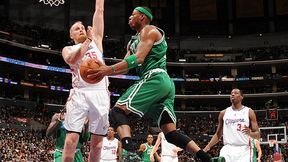 Chris Kaman defends Paul Pierce near the rim.Know a team that could use another big man? From ESPN.com's Marc Stein:

The New Orleans Hornets are actively trying to trade center Chris Kaman, who was not with the team for its home game Friday night against Orlando as the league-owned Hornets field trade calls for him. The Hornets have decided to shelve Kaman until they can find a trade home for him after making the decision to give his minutes to young players. Kaman had been made inactive for Wednesday's loss at Oklahoma City even though he's not injured. "We've informed Chris that we are looking into possible trades and he was understanding about the situation," Hornets GM Dell Demps said. "We're working together on this... Chris has been the ultimate professional since he joined us. In no way is this a disciplinary action. We had discussions about extending his current contract when he first came to the Hornets, but the organization decided to go in a different direction."

Only naturally, the mailbag was flooded this morning with questions about whether the Celtics could make a run at the 29-year-old 7-footer who has averaged 9.2 points and 8.3 rebounds per game over a nine-year career.

At the moment, it's extremely unlikely via trade. Kaman is making $14 million this season in the final year of a five-year, $52 million deal inked back in October 2006. Unless the Celtics were willing to bust up their core, the Celtics really have no combination that would work -- at least that New Orleans would be looking for in return (and we already kinda know how they feel about the likes of Rajon Rondo and Jermaine O'Neal from the Chris Paul and Davis West flirtations).

Boston's only real hope is if the Hornets find no suitable trade location and are forced to facilitate a buyout (no guarantee since the Hornets could simply make Kaman ride out the season). Much like with Mickael Pietrus, the Celtics could make a minimum-contract offer if Kaman was bought out and cleared waivers, with hopes that a chance for minutes and a title opportunity would be enough to entice him before testing unrestricted free agency in the summer.

The Celtics are currently at their 15-man roster limit, though Greg Stiemsma's contract is not fully guaranteed, or the team could potentially swallow another minimum salary if it were comfortable with depth elsewhere on the roster.

Given their lack of pure centers, expect the Celtics' interest to be piqued any time there's a legit 7-footer available before season's end.

Kaman landed in New Orleans with Eric Gordon, Al-Farouq Aminu Aminu and Minnesota's unprotected 2012 first-round pick in exchange for Paul in December. Three months shy of his 30th birthday, he is still the oldest player on the Hornets' roster (though he'd practically be a spring chicken among Boston's aging core).