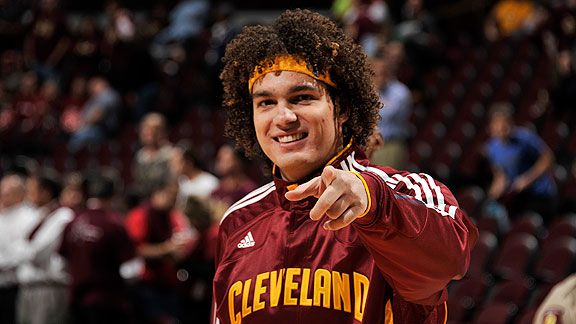 The Celtics host Anderson Varejao and the Cavaliers Sunday evening at TD Garden.It's a battle of two teams trending in opposite directions as the Boston Celtics (9-9, 6-5 home) host the Cleveland Cavaliers (7-11, 4-7 away) Sunday evening at TD Garden (6 p.m., CSN). While the Celtics have won five of their last six games, the Cavaliers have dropped five of their last six. To preview the matchup, we go 3-on-3 with ESPN Boston's Greg Payne and CelticsHub's Brian Robb.

1. How much do the Celtics miss Semih Erden and Luke Harangody?

Payne: I don't think the Celtics miss either of them too much right now. Sure, Erden might have come in handy over the last handful of games with Jermaine O'Neal battling a bone bruise on his left knee, but both of their respective positions are essentially full right now with J.O. and Chris Wilcox at center and Kevin Garnett and Brandon Bass at power forward (the small forward spot is booked up as well). Chances are they wouldn't be seeing too much floor time if they were still in Boston.

Robb: Not at all. They're both fringe NBA players, and while they had a few nice spurts last year with the C's, the fact they are struggling to get off the bench this year in Cleveland should tell Boston fans all they need to know about their abilities. You could make the case that Erden could have still been valuable in the role Greg Stiemsma has claimed now as the third center on the roster, but the Stiemer brings more defensively than Erden ever did. As for Luke, the team already has enough trouble with athleticism, so it's unlikely he would have seen the floor at all this year if he had remained in Beantown.

Forsberg: OK, so we agree Harangody's no big loss (hey, he was a second-round pick who played better than most probably imagined). But you guys are totally undervaluing Erden. We're talking about a 25-year-old 7-footer who gave the Celtics everything he had last season, playing injured almost his entire stay here because of the fact that neither O'Neal -- Shaq or Jermaine -- could stay on the floor. Erden generated consistent offense around the basket (he ranked in the 75th percentile among all NBA players last season with Boston at 0.987 points per play, according to Synergy Sports data) and his defense was actually far better than Stiemsma's shown thus far (we'll give Stiemsma the benefit of time, but Erden allowed 0.879 points per play last season with Boston; Stiemsma is allowing 1.0 points per play this season, according to Synergy). For what they got in return -- a 2013 second-round draft pick and roster space that the likes of Carlos Arroyo and Troy Murphy clogged up -- you can make the case this was actually the worst trade the Celtics made at the deadline last year because they had to move Erden.

2. With the way Boston is playing lately, give me one reason to be worried about a home-and-home against the Cavaliers.

Payne: Kyrie Irving. The one-year Duke product is living up to the hype as the No. 1 overall pick in last year's draft and he's certainly quick enough and has the ball-handling ability to not be bothered by the pressure Avery Bradley and Co. have been putting on opposing point guards lately. [Forsberg's note: Payne being a Duke supporter, we knew exactly where he was going with this answer before he even responded].

Robb: Anderson Varejao and offensive rebounds. The Cavs undersized center has always been a thorn in Boston's size and brings the kind of energy on the offensive glass the C's have had trouble containing this year. The bigs did a terrific job keeping the Pacers at bay in this department Friday night, but they have been inconsistent all year long with their defensive rebounding. Limiting second chance opportunities by keeping a body on Varejao in the paint all night will be pivotal if the C's want to continue their winning streak.

Forsberg: Man, I hate going last because B-Robb totally stole my thunder. The Celtics didn't see Varejao at all last year, but Celtics coach Doc Rivers spent most of the 2009-10 season (and especially the playoffs that year) gushing about what a game-changer he is with his tireless energy. The Celtics absolutely have to prevent him from running amok under the glass. The Cavaliers don't do a heck of a lot else very well, but they are above average in 3-point percentage (10th in the league, 36.6 percent) so Boston needs to keep an eye on the likes of Irving and Antawn Jamison beyond the arc.

3. A lot of Boston's young players have gotten big minutes because of injuries lately. Which young player will be most impacted when the Celtics get back to full health?

Payne: Stiemsma. If Chris Wilcox can be even a shade of the player we saw against the Pacers on Friday, he'll have no trouble permanently leapfrogging Stiemsma in the rotation. O'Neal, when healthy, will start, and Wilcox will be Boston's reserve center off the bench. Boston will then utilize a big man rotation of O'Neal, Wilcox, Kevin Garnett, and Brandon Bass. Stiemsma's cause hasn't been helped by the fact that he's played poorly over the last few weeks, as opposed to someone like E'Twaun Moore, whose play of late could still earn him minutes once everyone is healthy.

Robb: Avery Bradley/E'Twaun Moore. When the team is fully healthy, there may not be room for either in the team's rotation, depending on whether Mickael Pietrus sees most of his minutes at the two or three spot. The likelihood is there won't be room for both in most games, especially if Marquis Daniels continues to play well, meaning Doc Rivers will likely go with just one of the two on any particular night. I see it playing out similar to the Leon Powe/Glen Davis situation back in 2008, where Doc rotated the backup power forward minutes, based on the particular opponent and which guy was playing better overall.

Forsberg: I think Moore is in the toughest spot. Given the option between offense and defense, Rivers is more likely to lean on the guy that can consistently be a pest to opposing ball-handlers as opposed to a young shooter still striving for consistency with his jumper. The tough part is that both Bradley and Moore need minutes and there's no simple way -- outside of more injuries -- to generate that for both of them, while still giving quality time to the likes of Daniels and Keyon Dooling. In the long run, rotations will shrink in the postseason and all the younger players would have trouble getting on the court. The only downside is that it's tougher for them to progress without consistent minutes, especially in a season with limited practice time.