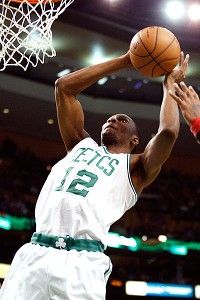 Celtics rookie JaJuan Johnson.Celtics rookie first-round draft pick JaJuan Johnson has made the most of his recent opportunities, averaging 10.5 points in two appearances during recent wins over the Raptors and Grizzlies. After not seeing a lot of time early in the year, Celtics coach Doc Rivers believes Johnson could be a rotation player sooner than later.

But what's Johnson like away from the court? From playing Temple Run on his iPhone to pass time in the locker room before games to a desire to fly (wait, he can't already?), Johnson opens up to ESPN Boston's Greg Payne in another edition of Outside the Paint.

Favorite thing about Boston so far?

"The food. I like the seafood so far. It's been pretty good."

Last movie you saw in theaters?

"The Girl With the Dragon Tattoo."

What was your favorite TV show growing up?

Did you have a celebrity crush growing up?

What's playing the most on your iPod right now?

What's the first thing you do when you wake up every morning?

What's your favorite game on your iPhone?

If you could have one superpower, what would it be?

Outside the Paint archive: Greg Stiemsma