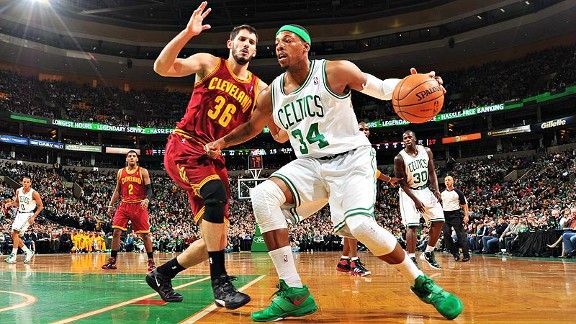 Rookie Kyrie Irving muscled in the go-ahead layup with 2.6 seconds remaining after the Cavaliers erased a double-digit deficit in the final four minutes to stun the Celtics on their home turf. Irving finished with a game-high 23 points, while Anderson Varejao added 18 points, 9 rebounds and plenty of his typical scrappy play -- fighting for a key loose ball in the final moments. For Boston, Ray Allen had a team-high 22 points, while Paul Pierce (18 points), Kevin Garnett (14) and Brandon Bass (13) all were in double figures.

The Cavaliers hung around for much of the night and made it a one-possession game (74-71) with 8:53 remaining, but it seemed the Celtics were intent on pulling away. Allen made a long jumper, Sasha Pavlovic followed with a dunk while driving the baseline, E'Twaun Moore splashed a 3-pointer and Bass added a jumper as the lead quickly ballooned to 11 with 6:09 to go. The Celtics were up 11 with little more than four minutes to go before Irving and Varejao sparked another run, pulling the Cavaliers within a bucket yet again (87-84) with 1:38 to go. This time they got over the hump. Varejao came up with a key offensive rebound, fighting for the ball on the ground and calling a timeout to set up Irving's heroics.

ALLEN JUMPS RIGHT BACK INTO THE FRAY

Allen missed three games last week with a left ankle injury, but it hardly seemed to detour him Sunday in his first game back. Allen connected on 9-of-14 shots, including 4-of-6 trifectas, chipping in 22 points over 35 minutes. He started quick, hitting 5-of-8 shots for 12 points in the first half.

FUTURE IS BRIGHT WITH IRVING

Cleveland sure looks like it hit the jackpot landing the No. 1 overall pick and selecting Irving. The 19-year-old point guard was an efficient 10-of-14 shooting, while adding six assists and four rebounds over 34 minutes. He showed absolutely no fear going hard to the basket for the winning bucket.

The Celtics have only themselves to blame after fumbling away a double-digit lead so late in the game. Boston's four-game winning streak is snapped and the team failed to get above .500. The schedule remains friendly moving forward with a rematch in Cleveland on Tuesday before the Raptors visit on Wednesday (later next week, the Knicks and Grizzlies drop by the Garden). Even still, this one will sting, stemming the momentum the team had built over the last week-plus.