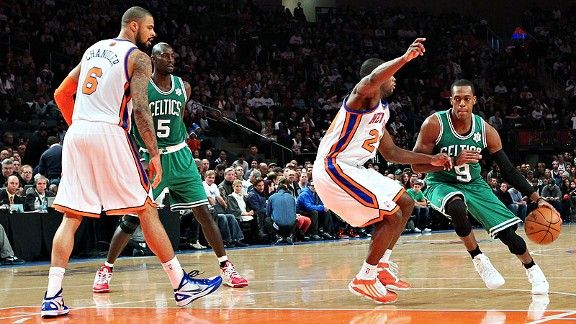 The Celtics get a chance to avenge a Christmas Day loss Friday at TD Garden.Six weeks after opening the 2011-12 season on Christmas Day, the Boston Celtics (11-10, 7-6 home) and New York Knicks (8-14, 4-7 away) renew acquaintances in an Atlantic Division battle Friday night at TD Garden (8 p.m., ESPN). To preview the matchup, which serves as the 1/3 checkpoint of the season for the Celtics, we go 3-on-3 with ESPN Boston's Greg Payne and CelticsHub's Brian Robb.

1. Carmelo Anthony said last month that he has a "vendetta" against the Celtics after last season's playoff sweep. No one up here even blinked. What's it going to take to make this an honest-to-goodness rivalry?

Payne: All the standard ingredients, including some intense regular-season meetings (the only part of this we received last season), a few spats between players, and a memorable playoff series. Tonight will be interesting, seeing as neither team has played great basketball this season (although the C's have been much better of late), but both are scrapping to work their way back up in the standings. Rivalries, though, often need continuity, and I'm not sure we'll have that with these two teams. This is Anthony's first full season in New York, and while there's always potential for things to ignite this season, the C's will have an overhauled roster at the start of next season, which could wipe away any progress that was made on the rivalry front.

Robb: A competitive team in New York. I hate to be so blunt about it but facts are facts. The C's swept them out of the postseason last year, and despite the opening loss this year, Boston has routinely destroyed the Knicks in regular season play during the entire The Big Three era. While the names are bigger in New York now, the record has become worse and no one around the NBA considers them a serious threat. Until that happens, we'll have to wait on the rivalry.

Forsberg: It would help if the Knicks would put up a consistent fight. Christmas Day was a step in the right direction, but let's face it, the Celtics have won 16 of the last 19 regular-season meetings and swept the Knicks out of the playoffs last season. We've seen a little bit of a hostility with the dust-up at the end of the first meeting when Kevin Garnett put his hand around the neck of old friend Bill Walker, so it will be interesting to see if any emotion carries over to this one. But, bottom line, it's probably going to take a heated postseason series -- one in which the Knicks top the Celtics, or at least push them to their limits -- before anyone in Boston is ready to bust out the "r" word.

2. Tough turnaround for the Knicks coming off Thursday's loss to the Bulls. Give me one reason to be leery of slumping New York.

Payne: Seeing as they're winners of just two of their last 12 games, the Knicks will be (or should be, at least) hungry for a win tonight, and even after losing a close one to Chicago last night, they still could come out with that sense of urgency that the C's might still not be quite ready to handle. It would bode well for the Knicks to come out firing and put Boston on its heels early. From a Celtics' perspective, seeing how they handle an opening assault like that from New York might be another unofficial test for the club.

Robb: They're getting their stars healthy. Despite the loss last night (and another game upcoming Saturday) the big guns are starting to find their rhythm. Anthony and Amare Stoudemire had standout offensive performances against a tough Bulls defense. Boston will be rested tonight, but they will have just as tough of a time as anyone in containing this formidable fro

Forsberg: Not only have the Knicks lost 10 of their last 12, but the only two wins came over the Bobcats and Pistons (two teams with a combined 7-40 record). As good as Anthony was in the first meeting, the Knicks simply haven't been very successful since bringing him in. As ESPN Stats and Info points out, the Knicks have lost 27 of 49 regular-season games (and were swept by Boston in the postseason) for an overall winning percentage of just .415 since the deal. By comparison, the Knicks were 28-26 (.460) to start the 2010-11 season before the swap. Anthony and Stoudemire are struggling a bit, but the one thing that should make Boston nervous Friday is Tyson Chandler, who is averaging a double-double and has big-game potential given the C's interior struggles at times.

3. The Celtics are playing some solid basketball lately despite injuries. Beyond health, what's one improvement you want to see from this team in the near future?

Payne: Late-game execution. The C's were one of the best in the business last season when it came to the last minute of a one-possession game, particularly on the offensive end. Doc Rivers is a certifiable wizard with the whiteboard, and his players, far more often than not, executed his schemes with precision and consistency. This season, there haven't been too many opportunities for Rivers to work his magic, and when there have been, his guys have botched the play almost every time (think back to losses against Dallas and Cleveland). Maybe it's just a matter of not having enough reps in this area, this season, quite yet, but the C's will need to be very good here come playoff time.

Robb: Continued improvement with their defensive rebounding. The C's still lurk in the bottom half of the league in the defensive rebounding rate, a significant dropoff from what was routinely a top-10 category for the team over the past few years. Historically, teams have been unable to make deep playoff runs with inferior numbers in this area compared to the rest of the league. Therefore, the C's will have to continue to make a concerted effort every night in this department to bring themselves up to par and avoid meltdowns like the one they had against Cleveland Tuesday night.

Forsberg: Completely agree on late-game execution. It hasn't been particularly encouraging to see the Celtics' offense get stagnant late in games (especially without Rondo) and the team failed to even get up a shot in the closing seconds against the Cavaliers (somewhat inexcusable even with a short clock). Offensively, the Celtics simply need to get more easy buckets around the basket. According to ESPN Stats and Info, Boston is averaging a mere 33.4 points in the paint per game -- that ranks 29th in the NBA this season. More post offense in the fourth quarter will go a long way towards alleviating late-game scoring woes.