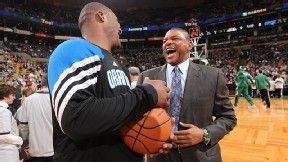 Glen Davis and Doc Rivers during his visit to the Garden last month.Old friend Glen Davis can't keep himself out of the headlines for head-shaking antics. The Magic forward, who earlier this year dropped his pants while protesting a foul call, was suspended for two games Friday for conduct detrimental to the team.

The Orlando Magic have suspended forward Glen Davis for two games due to conduct detrimental to the team, President of Basketball Operations/General Manager Otis Smith announced today. Davis will miss tonight’s game vs. Cleveland and tomorrow night’s game at Indiana.

The Orlando Sentinel's Josh Robbins reports that, "Davis had an outburst during the team's shootaround this morning at Amway Center."