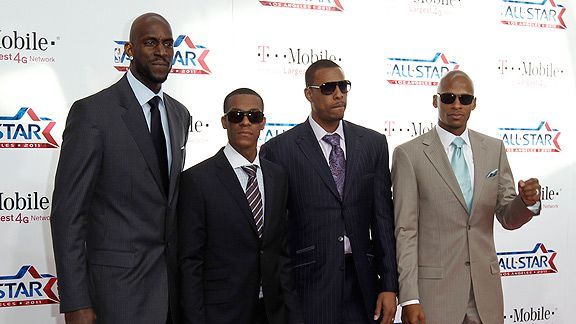 RIVERS WILL STUMP FOR (ALL-)STARS

None of the five eligible Celtics landed among the East's All-Star starters based on fan vote (point guard Rajon Rondo was the team's top vote-getter and was a distant third behind Chicago's Derrick Rose and Miami's Dwyane Wade at the guard position). Now, the 30 NBA head coaches will vote for seven players from within their own conference (two guards, two forwards, a center, and two players regardless of position) to comprise the All-Star reserves.

Coaches cannot vote for their own player, hence why cell phones will be burning up this weekend with reserves set to be announced Thursday evening (before the Celtics and Lakers joust on TNT).

"I usually call [other coaches], all my friends -- so that’s usually one call," quipped Rivers. "No, I call guys. I always do, just to make sure. And they call you. Last year was just strange, really, I don’t know what it said, but I didn’t get a call from one coach last year asking me to vote for their player. I thought that was really unusual. This year I think you will get a ton of calls. This year is going to be a lot tougher. There's a lot of guys that are playing well."

Last year, Boston's Big Four of Rondo, Ray Allen, Paul Pierce, and Kevin Garnett were all named All-Star reserves (what's more, Rivers and his staff served as coaches). Rivers wouldn't tip his hand on who'd he be stumping for, smiling and saying simply, "Everyone."

With old friends like Tom Thibodeau in charge in Chicago and Lawrence Frank now the helmsman in Detroit, the Celtics probably have a solid chance at getting at least a couple of invites. Despite finishing with the lowest fan voting total among Boston players, Pierce is probably the most deserving up the bunch (though you can certainly make a case for the whole lot, especially given the lackluster play in the East early in the 2011-12 season).

Rondo managed to make it through Friday's game without any apparent incidents around his ailing right wrist that forced him to sit out the previous eight gams. Alas, Rondo did catch an inadvertent blow near his right eye from New York's Iman Shumpert in the first quarter that left him with a shiner (and a puffy eye) for much of the night.

Rondo finished with seven points on 3-of-8 shooting with seven assists, five rebounds, and two steals over 34:21. He spent much of the night icing the eye on the bench, trying to get the swelling down (team physician Brian McKeon looked more like a boxing cornerman at times than a doctor). But Rivers said it didn't affect Rondo's play.

"His vision was fine," said Rivers. "It just kept blowing up on him, so they kept icing it. [Team trainer] Eddie [Lacerte] never mentioned it to me, so I didn’t worry about it."

Rondo displayed some expected rust Friday, turning the ball over five times and looking out of sync in stretches.

"I thought he played well, [but] I mean, he was rusty, obviously," said Rivers. "And I thought he played a little gingerly with his hand at times. You know, we’ll assess it [Saturday] and see how he feels and keep going. You don’t miss that amount of games, don’t practice at all, and then walk into an NBA game and play well. That’s just hard to do.”

The Celtics did get a spark from having Rondo back on the floor (and backup Avery Bradley provided a much-needed burst with his inspired defensive play off the bench).

"Having 9 [Rondo] back, we knew there were going to be a couple hiccups, just because of his presence," said Garnett. "Having been without him, it's great to have him on the floor, man. It's good to have the general back."

Added Pierce: ""He's our floor general, he knows the plays. It's just a different play set when he's out there, because he knows the entire playbook. There's a set of plays we run when Rondo's not in, but when he's out there, it kind of expands our playbook a little bit more, so we start running plays that we haven't ran probably in the eight or nine games, and that's really what opened up Ray for those [late-game] 3-pointers."

* Mike D'Antoni on Steve Novak -- he of 4 seconds of total court time Friday -- hoisting the final shot. "We were trying to get a shot. Obviously, that was the objective. Novak instead of Jared [Jeffries], if he got fouled, made sense. We didn’t execute it real well. [The Celtics] were into you. I though we had great looks two or three times before that, we didn’t make them, and we ran out of great looks. They shut us down at the end.”

* The Celtics didn't disguise their defense late in the game and openly trapped Carmelo Anthony in the fourth quarter, limiting his offensive output in the final frame (he scored only 2 points on 1-of-5 shooting over the final 12 minutes, but finished with a team-high 26 points on 8-of-17 shooting overall). Said Rivers: "After watching every shot go in, I had had enough. More importantly, and Kevin [Garnett] said if we simplified the traps, stopped trying to sneak trap him -- that wasn’t working-- so we just trapped him and got the ball out of his hands. They had some open shots they missed." Added D'Antoni: "They were doubling, doing a good job. That’s why other guys had to step up and make shots and we did a little bit to get us back in the game. We did some great things. Again, we had a real shot to win and we're a little snake-bitten right now.”

* Anthony was in no mood to talk about the final play. Clearly frustrated as he walked off the court, he later said of the play, "My mind is blank right now. I can’t even remember that last play. I don’t know what happened. I will answer that question tomorrow... They were triple-teaming me. I told my teammates, every time I catch it they were sending two or three guys at me -- Just be open and I’ll find you. I found Shump for a wide-open 3. He had a chance to make it; he missed it. It was a great shot. The other time down the court, I found Landry [Fields] in the corner. He had a great look; he missed it. I really couldn’t plan against three guys. It’s tough out there. The only thing I can do when someone double or triple teams me is to find the open man. That’s what I did tonight."

* Some seem desperate to manufacture a rivalry between the Celtics and Knicks. That should take care of itself if nail-biting games like this keep occurring. Rivers playfully suggested there are bigger Boston-New York rivalries looming with Super Bowl XLVI on Sunday. "There’s history long beyond us, New York and Boston," he said. "I think these two cities have a big game on Sunday coming up. There’s just always history -- and lots of love."

* Those that wondered how the rotation might shake down with Rondo back got a glimpse at that answer Friday night. Bradley played 15:48 off the bench, one of four heavily used reserves (Brandon Bass, Mickael Pietrus, and Chris Wilcox the others). Sasha Pavlovic logged 3:21. Rookies JaJuan Johnson, E'Twaun Moore, and Greg Stiemsma did not play (coach's decision), while Marquis Daniels (right foot) and Keyon Dooling (right hip pointer) were inactive.