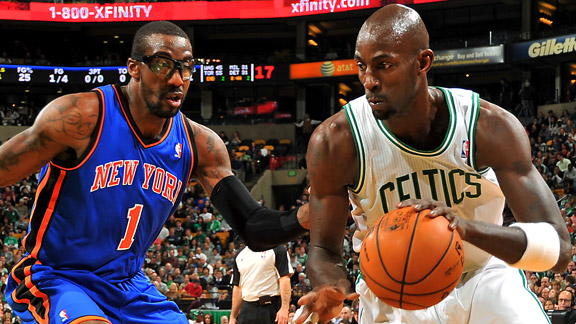 Kevin Garnett and the Celtics rallied past Amare Stoudemire and the Knicks.BOSTON -- Rapid reaction after the Boston Celtics defeated the New York Knicks 91-89 Friday night at TD Garden:

With Rajon Rondo back in the starting lineup, Paul Pierce kicked it back into scorer mode, connecting on 8 of 22 shots (including 4 of 11 beyond the 3-point arc) while scoring a game-high 30 points (to go along with 7 rebounds and 5 assists) over 43 minutes as the Celtics overcame a 12-point second-half deficit. Pierce might have had three more points, but video replay wiped out what was originally scored a made triple with 16.1 seconds to go in a one-point game. Boston's defense came up with two big stops (Pierce making a free throw in between) to hang on. Ray Allen started slow (2-of-5 shooting for 5 points through three quarters), but caught fire in the final frame, converting a pair of big 3-pointers and a baseline layup to finish with 14 points. Carmelo Anthony paced the Knicks with 26 points, while Tyson Chandler added 20 points and 11 assists.

The Celtics had whittled as much as a 12-point deficit down to a bucket with little more than eight minutes to play and it was clear they simply wanted it more than the Knicks when it mattered most. During one sequence, Pierce won a footrace to a loose ball in the backcourt, then, after a miss, Chris Wilcox pried the ball loose from a Knicks player before getting fouled going up with it under the basket. His free throws tied the game at 75. The next possession down, Wilcox got on the ground to force a jump ball. The Celtics didn't pull ahead until Ray Allen's 3-pointer with 4:24 to play (thanks in part to Rondo's hustle to force the Knicks to fumble the ball out of bounds right before the trey), but it was clear from that sequence that Boston would not be denied. The Celtics dominated what we like to call the WIM category (wanted it more) in the fourth quarter.

Kevin Garnett became only the third player in NBA history to register 10,000 defensive rebounds with his fourth of the night late in the first quarter. He joins Karl Malone and Robert Parish as the only other members in that elite club. How did Garnett celebrate? By draining his second 3-pointer in as many games.

DOC GETS A TECH

Unhappy with the calls going against his team in the early portion of Friday's game, Celtics coach Doc Rivers got a little too chirpy with referee Curtis Blair, who hit Rivers with a technical foul (his fourth of the year). The Knicks attempted 17 first-half free throws (making 14, compared to 6-of-9 shooting at the stripe for Boston before the intermission). By the end of the game, Rivers' complaining might have helped even up the shots (the Celtics were 19-of-25 at the stripe; the Knicks were 18-of-21).

You ever been in a bar fight, Craig? That one was a lot of fun. Haymakers from both sides and big shots by the truckload late in the game. The Celtics avenge a Christmas Day loss to New York and, with Philadelphia getting blown out by Miami, reassert themselves a bit in the Atlantic Division. Boston has now won eight of its past 10 and keeps the momentum going on this five-game homestand.