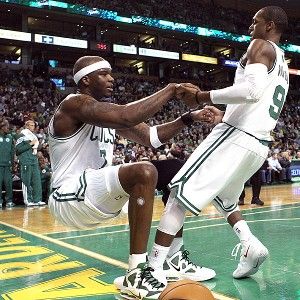 Coach Doc Rivers initially suggested that the MRI was on O'Neal's left knee and was a regularly scheduled visit to monitor the chronic injury (he also suffered a bone bruise on his left knee cap last month in the first meeting with Orlando). The team later clarified it was the right knee.

Results were not immediately available and the team will determine his game status after a closed walkthrough on the TD Garden floor on Sunday morning.

O'Neal played 19 minutes, 37 seconds in Friday's win over the New York Knicks, but only 12 seconds in the fourth quarter. Rivers admitted O'Neal looked a little slow out of the gates, but suggested he would have been able to return.

"Early on, you could see, I thought he was moving slow," said Rivers. "But he was ready to come in at the end of the game. He did well for us [in the second half]. He does his job. His productivity, if you go by the numbers, you’ll be fooled a little bit -- he does a pretty good job for us."

O'Neal sat out three games last month after suffering the bone bruise in absorbing a charge by Hedu Turkoglu in the first meeting with Orlando. He had previously sat out a game in early January due to general soreness.

Elsewhere on the injury front, Rajon Rondo participated in the light 45-minute session and reported no abnormal soreness with his right wrist in returning to the court Friday after missing the previous eight games. He was sporting a grisly shiner below his right eye, but said any of his struggles Friday were in no way related to the eye (which simply needed to be iced during the game to relieve puffiness after catching a stray hand from New York's Iman Shumpert).

Keyon Dooling (right hip-pointer) participated in a second-unit walkthrough at the end of the session and Rivers suggested he's getting closer to a return. Marquis Daniels (mild right ankle sprain) did not engage in any activity, which would make him doubtful for Sunday's game.

"Keyon is close, but he just can’t breakthrough," said Rivers. "We thought he’d be back a couple games ago and he did some stuff and got sore again, so we just don’t know."