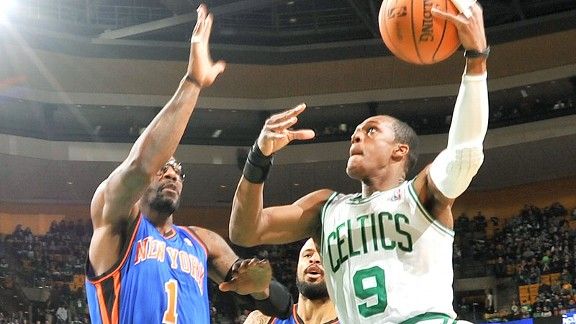 Rajon Rondo drives to the basket Friday night against the New York Knicks.WALTHAM, Mass. -- Celtics point guard Rajon Rondo said that Friday morning was the first time he was able to get up shots since injuring his right wrist, just hours before he returned to the floor for the first time since sitting out eight games.

Rondo detailed Saturday how he did not engage in virtually any on-court activity during a 15-day absence after landing awkwardly on the wrist while being flagrantly fouled against the Toronto Raptors on Jan. 18. Rondo said he was trying to protect the wrist by limiting the use and didn't want to suffer a setback that could have further detoured his return.

"So I got up shots when I took a couple in the game last night," he shrugged.

Rondo said he was trying not to be too hard on himself after Friday's game, but was clearly discouraged after turning the ball over five times and struggling with his shot (he was 3-of-8 shooting for 7 points, but connected on just 1-of-4 free throws).

"I try not to get too down, too negative on myself, but I was pretty [bad] last night," he said. "Realistically, I haven’t touched a ball since Toronto because of the wrist. I’m a right-handed player, so I couldn’t shoot free throws. I beat myself up because I missed three free throws and because of the turnovers I made. I wasn’t strong [enough] to make the pass. That was the sacrifice I made to go out there and play."

The good news: Rondo didn't report any additional soreness the day after his return. He did sport a grisly shiner below his right eye -- the lingering remnants after Knicks guard Iman Shumpert caught him with an unintentional hand to the face as Rondo pressured the ball in the New York backcourt in the first quarter on Friday. Rondo made sure to stress that the eye didn't hinder him Friday, noting the turnovers were more the result of the weak wrist than the puffiness around his eye.

Rondo iced the eye on the bench to relieve that injury, and that's about all he can do with the wrist right as well. He said the pain is "100 times better than it was a couple weeks ago," but he's still getting acclimated to playing with a restrictive brace over the ailing area.

"You'll see this on me maybe one or two more games," Rondo said, grabbing at the black brace. "I wouldn’t say it bothers me mentally, but it’s really tight. I have to wear it for the support."

Rondo admitted to trying his best not to draw contact near the right wrist and said he's trying to avoid having to brace himself with the right hand when he hits the floor. At the moment, however, his bigger concern is just getting back into game shape after the two-week absence.

"It felt great [to be back on the floor, but] it’s a different flow," he said. "Not practicing or anything in two weeks, so to go right back out in the game, you just never know until you’re in the game. You can run, do cardio all you want, but when you get on the floor and go through pick-and-roll, hit the floor and get up, [run] back and forth, its a different type of game."

Celtics coach Doc Rivers thinks it'll just take time for Rondo to get back into form.

"He felt a little bit better [Saturday], minus the eye part," said Rivers. "I just think it’ll take him a couple games to get his feet back and his speed and rhythm back."

The facial blemish and the ailing wrist couldn't stop Rondo from taking time after the open session at the team's practice facility to sign autographs for a corporate sponsor.