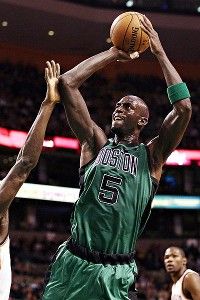 Kevin Garnett: 3-point specialist.BOSTON -- Celtics forward Kevin Garnett made his third 3-pointer is as many games during Sunday's win over the Memphis Grizzlies. Once again it was a hot topic in his postgame chat with reporters and it spawned an absolutely hilarious rant from Garnett. Here's the full transcript:

"Don’t get used to that y’all. It’s not even that. Man, listen, I can shoot 3s. OK? We need to cut this, all right? Because I don’t want no more questions about this -- I can shoot 3s, all right? You’re all acting like I’m 50 and I’m out here on one leg and a cane. Some nights are better than others. I’m human, I mess up. I make mistakes. But I can shoot 3s.

"I don’t shoot 3s because we have one of the all-time greatest 3-point shooters in history [in Ray Allen]. We have Paul Pierce, who has won the 3-point contest. We have other guys in here that can shoot 3s. That ain’t my role here. My role is to get those guys open. And if they throw it to me -- shoot it, dunk it, pass it -- OK, cool. But I can shoot 3s.