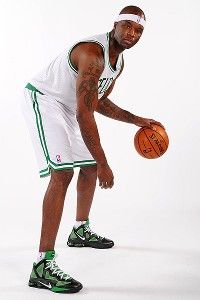 Jermaine O'Neal wouldn't mind some defensive recognition.BOSTON -- Following Sunday's win over the Memphis Grizzlies, Celtics center Jermaine O'Neal flipped the script on reporters and asked us a question about his performance this season.

"At the end fo the year, if I’m up [at the top with the league's leaders] in charges and I'm still blocking shots, can I at least for one time in my life make the All-Defensive team?" asked O'Neal. "There are no bigs taking charges, no bigs doing that. It’s all guards. When I looked at the [leaders] list, it was dominated by guards and wing guys. But this is about giving all of me out there. I deal with the consequences when I get home, or on days when we have practices. But if there are charges -- and a lot of it is on wing guys or perimeter guys -- and I can pick up a foul against them, get us one step closer to the bonus. I’m going to do it. I just gotta deal with the consequences later."

The consequences are injuries like a bone bruise on his left knee or an ailing left wrist, lingering pains from charges taken over the past two seasons. There's no spot in the box score for enduring the bumps and bruises that come with doing the gritty work, but O'Neal is fine with that.

But for a player who prides himself on what he does at the defensive end, especially as his scoring output has declined later in this career, O'Neal wouldn't mind a little recognition for his defensive prowess.

And why not? O'Neal is third in the league in total charges drawn (19) behind only Sacramento's DeMarcus Cousins and Minnesota's Ricky Rubio (21 apiece, though both have played more minutes and more games). Only Minnesota's Jose Juan Barea (1.33) is ahead of O'Neal (1) in charges per game. What's more, O'Neal is averaging 1.4 blocks per game this season.

"Jermaine, like I said, he’s such an anchor for us. And people read his numbers, but it’s what he does for our team. It really is. I mean, it’s very similar to the [Kendrick Perkins]. If you read Perk’s numbers with us you would say, ‘Well, he’s not productive at times.’ [O'Neal is] extremely productive and we need him.”