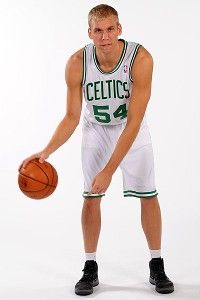 Celtics center Greg Stiemsma.BOSTON -- The mere idea of laying down some roots was enough to make Greg Stiemsma smile. After all, the last three-plus years of his basketball journey has taken him from his native Wisconsin to South Korea (twice), Turkey (twice), and Sioux Falls, S.D. (twice). Amidst it all, he inked three NBA contracts (Minnesota, Cleveland, and Boston), but was never guaranteed that he'd stick around.

Until Tuesday that is. That's when Stiemsma learned the Celtics would not be parting with him before contracts for the 2011-12 season become guaranteed on Friday, making it unlikely the team will cut him before season's end. Undrafted out of Wisconsin, forced to earn his stripes overseas and in the D-League, Stiemsma has finally stuck to an NBA roster, meaning the only travel he has to worry about for the foreseeable future will be in the luxury of the Celtics' team plane.

"I was just talking to somebody the other day about how, last year at this time, I was hopping in my little Ford Focus that they gave me over in Turkey and driving to practice there," said Stiemsma. "To now be in this whole situation, it definitely feels good."

But wait, the Celtics aren't handing our free cars to rookies.

"I’ll take my truck, my own ride," Stiemsma said with a smile.

Yes, you can imagine it's not very easy stuffing a 7-footer inside a compact vehicle.

Plus, Stiemsma now has a little extra disposable income. According to salary site, ShamSports.com, Stiemsma is earning a minimum salary of $762,195 this year. The Celtics could always swallow his contract if they were desperate for roster space later in the season, but that money is guaranteed and that alone is a relief to the 26-year-old, who admitted he's still on a month-to-month lease with the apartment he's renting in town.

But maybe now he can finally buy a few things to spruce up his digs without worrying they'll have to be stuffed in a moving box any time soon.

"I can get a little bit more settled," said Stiemsma. "It feels good to kinda call it home, for a little bit longer at least."

After that, it's all about sprucing up his on-court game. Asked what Stiemsma needs to improve on in order to become a rotation candidate again, Celtics coach Doc Rivers pointed to his defense.

"Really, it's speed wise, and I think he actually has the speed, it’s just technique -- especially in pick-and-roll coverage," said Rivers. "He pretty much stands straight up and it’s amazing how quickly the league scout you. He comes in and they are running pick-and-roll, and they know that. But he’ll get it."

Rivers was adamant, however, about his talent level. The Celtics, who would certainly benefit from having another serviceable bit man up front, apparently have looked at what's available and determined that Stiemsma has the best chance to thrive here.

"Well, he can play; that’s the main thing," said Rivers. "If he couldn’t play, but was a great guy -- we’d probably send him on his way. But he can actually play and he’s a big guy that can play. And we’re just hoping we can keep developing him to make him a better player."

What does Stiemsma think he needs to work on?

"Just a few little things," he said. "Screens, working on better screen angles; getting into the flow of the offense, too, not turning down my shot when it does come. Just going out there and taking care of the ball. And blocking everything, block every shot and get a rebound. That’s kind of the goal when I’m out there. Any time you get that chance, you gotta do that."

Yes, the kid who debuted (and earned Bill Russell comparisons) with six blocks against New Orleans in December has earned his stay in large part because of that shot-blocking talents. Heck, it was what stood out most to Rivers when he learned -- just two days before training camp this year -- that Stiemsma would be auditioning for a roster spot.

"I didn’t even know him two days before training camp," Rivers admitted. "We were sitting in [ Celtics president of basketball operations] Danny [Ainge's] office and I think [director of player personnel] Austin [Ainge] and [assistant general manager] Ryan McDonough put on a tape, and said, ‘Hey, by the way, this guy, we’re going to invite to camp as well.' That was my first introduction to him. I should have known him from all the whoopings Marquette had given Wisconsin...

"He piqued my interest immediately because -- you know, with tape, obviously, we show a lot of the good things -- but a lot of those good things were blocked shots that you thought there was no way he could get to. And he kept getting to them, and so that was impressive."

Stiemsma feels like he's come along way since camp and Tuesday offered him another chance to reflect on his journey. He's excited for what lies ahead in Boston.

"I've tried to [reflect] at a couple points this season, just realize how far I’ve come, the things I went through, even if it's just a reminder to keep working," said Stiemsma. "Keep building on what I’ve learned so far. Hopefully, there's a lot more to come."