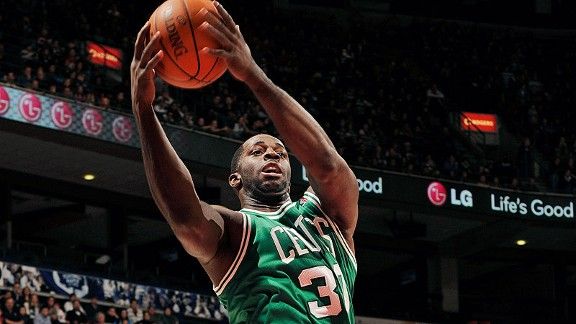 Brandon Bass and the Celtics are north of the border to meet the Raptors.Following a loss to the rival Los Angeles Lakers on Thursday night, the Boston Celtics (14-11, 4-4 away) have a tough turnaround Friday night as they visit the Toronto Raptors (8-19, 3-7 home) at the Air Canada Centre (7 p.m., CSN). One thing Boston has going for it: A 17-2 record against Toronto over the last 19 meetings. Blame it on a passport issues, but we're short a man as we go 3-on-3 with ESPN Boston's Greg Payne to preview the matchup.

1. What was the most frustrating aspect of Thursday's loss?

Payne: I think it has to be the botched final play of regulation. The Celtics wanted to have Ray Allen open off of a flare on the left wing and they got just that. I mean, Allen was wide open. Unfortunately, Paul Pierce just didn't have a great angle to make the needed pass. It's not even necessarily Pierce's fault. It's not like he intentionally ruined the play, it was just one of those rare flukes that unfortunately impacted the outcome of a close game. It's frustrating mainly because the C's essentially executed the most important part of the play -- getting Allen open -- and you have to think his chances of burying a wide-open 3-pointer would have been pretty darn good.

Forsberg: The late-game execution was maddening given how sloppy the Celtics were both at the end of regulation and in overtime, but the most frustrating aspect of that game had to be the free throws. The Celtics only shot five (FIVE?!?!) free throws overall. Boston shot four first-quarter free throws and over the next 41 minutes, attempted just one (ONE!?!? )more. The Celtics never stepped to the line after the intermission. How in the world does that happen in a game as physical as the one against the Lakers? The mere possibility of a team going that long without getting to the line is unfathomable. Pierce shot three freebies, Allen two more. And that's it. That's unacceptable.

2. Should Thursday's loss dent the recent optimism around this team?

Payne: Not at all. It was a frustrating loss, sure, but Kevin Garnett won't shoot 6-for-23 most nights, and the Celtics are usually much more cognizant about getting to the free throw line. The Celtics shot themselves in the foot on multiple occasions, but as long as they regroup the right way tonight, they shouldn't let any discouragement from last night's loss linger.

Forsberg: No, it's actually kind of amazing, in hindsight, how the Celtics lost this game. Sure, they got killed on the glass and allowed too many second-chance opportunities. But between the lack of late-game execution and the lack of free throws, Boston couldn't get out of its own way. The question is how they respond, maybe not so much tonight in Toronto, but when the Eastern Conference rival Bulls visit on Sunday at the Garden.

3. Second night of a back-to-back on the road coming off an emotional game, is that enough to slow the Celtics against the Raptors?

Payne: I don't think it'll be another 40-point blowout tonight, but by the time it's all said and done, the C's will have won fairly comfortably, within the 11- to 14-point range. Similar to how Tuesday's game against the Bobcats went, the C's probably won't step on the gas pedal until the second half, when they'll methodically pull away and slowly lull the Raptors to sleep.

Forsberg: Doc Rivers might have joked that Thursday's game looked like Jurassic Park given all the old-timers on the floor, but facing Toronto tends to be Jurassic Spark for the Celtics. Rondo's got a little extra motivation facing the team he hurt his wrist against and the Celtics as a whole should be a whole lot more aggressive given how Rivers probably spent the entire flight up blasting them for not getting to the charity stripe in the second half against the Lakers. This one should be a fairly breezy win, especially considering the average margin of victory for Boston over Toronto this season is 29.5 points.