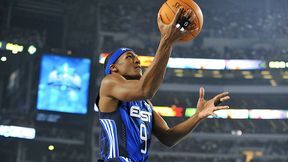 I'm fine with leaving off Rajon Rondo (or Kyrie Irving, or the rejuvenated Brandon Jennings) because [the Eastern Conference is] loaded at point already with Rose and Williams, even if Rondo is averaging a 14-10-5, shooting 50 percent from the field and still giving us those one-of-a-kind Rondo highlights. Am I slowly coming to the realization that I've been in deep denial about the Rondo era? Yeah, a little bit. Any smart team (like the Lakers last night) plays six feet off Rondo in tight games, daring him to shoot, paralyzing Boston's offense and leading to the dreaded "Clogged Toilet" play (Pierce ending up with the ball 25 feet from the hoop with seven seconds left trying to create something). It's almost like playing with a handicap. Screw that, it IS like playing with a handicap. It's also curious that the Celtics came alive defensively when Rondo missed eight games, mostly thanks to Avery Bradley, who flashed Tony Allen/Bruce Bowen-type potential as a perimeter defender (and that's not hyperbole).5 For the first time, I find myself hoping they deal Rondo — for instance, maybe it could be a three-teamer with Pau Gasol and Keyon Dooling going to Houston; Luis Scola, Goran Dragic, Kyle Lowry and L.A.'s 2012 no. 1 going to Boston; and Rondo and Jermaine O'Neal going to the Lakers. He needs a change of scenery, and really, so might Celtics fans. I can't watch another 84-82 game with his guy playing five feet off him. I really can't. Enough already.

Hop HERE to read the full story. And sound off with your thoughts in the comments.