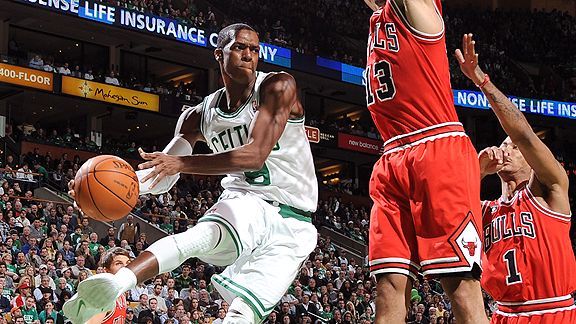 Can Rajon Rondo and the Celtics get past the Bulls on Sunday?All it took was consecutive losses for panic to return to Boston and two uninspired losses against the Lakers and Raptors have some fans of the Celtics (14-12) racing back out towards the ledge as the NBA-leading Chicago Bulls (23-6) visit TD Garden on Sunday afternoon (3:30 p.m., ABC). A win would go a long way towards calming the masses, while a loss could reinvigorate those leading the Occupy BlowItUp initiative. To preview Sunday's showdown, we go 3-on-3 with ESPN Boston's Greg Payne and CelticsHub's Brian Robb:

1. Dust off those panic meters: How concerned should we be about the Celtics after these two recent losses?

Payne: I'd say everyone should be more frustrated than panicked. The loss to the Lakers was one of those games that gets away sometimes, but Friday's loss was much less forgivable. I don't think anyone's seen Doc Rivers as irate as he was with his team underperforming against the Raptors, and that emotion will hopefully spark his team and keep them from relapsing into any bad habits.

Robb: Not overly concerned. The hole the C's dug for themselves early on this season make their last two losses uglier than they should be. In reality, Boston is battling the same problems they have been all year: offensive execution, turnovers, and rebounding. They did not have enough size, energy and focus to overcome those issues, especially in Toronto on Friday night. The bigger concern for me is the number of minutes Doc Rivers is playing the starters. Celtics president of basketball operations Danny Ainge has stated these next weeks will be crucial in determining whether he will make any moves at the trade deadline. Rivers is going all out with these guy minutes-wise, perhaps very well knowing this upcoming stretch could be the last chance for this core to play together. The question is now whether the starters will respond.

Forsberg: The lack of execution Thursday was frustrating; the lifelessness Friday was worrisome. Sure, it was a trap game stuffed in between two rivals, but to get dressed down by your coach like that and still be unable to respond against an inferior opponent over the next three quarters leaves me wondering about this team's mental toughness. Some have their panic meters back on 11 already, but we'll give this team an opportunity Sunday to show how they handle this adversity before passing judgment. The beauty of this crazy schedule is that they can atone very quickly; the danger is a lopsided loss could be crushing for their already cracked confidence.

2. How much is point guard Rajon Rondo to blame for the lack of recent offensive execution?

Payne: It usually just comes down to Rondo's level of aggressiveness. There are plenty of games when he completely controls the tempo and the flow of the offense, but then there are nights when he's not as assertive and the offense suffers accordingly. It's tough to pinpoint exactly what the reasons are when Rondo has an off night, but the bottom line is he always bears a significant portion of the responsibility when the offense isn't working the way it should.

Robb: His fair share. There is plenty of blame to go around, but Rondo is clearly struggling to incorporate himself back into the team's offense since returning from his wrist injury. With no real practices to get himself re-acclimated it's been a tough transition, and the bigger worry for me with the point guard is his lack of aggressiveness offensively. The C's are most dangerous when the former All-Star is viable thread on the offensive end, and that is something he has not been since his return, averaging just 8.2 points per game and only 40 percent shooting. This team can't afford a slump like that from the engine the offense.

Forsberg: Rivers clearly wasn't pleased with his team as a whole, but to resort to putting an injured Avery Bradley on the floor just to get some energy was a telling sign about what he thought about the play to that point. Rondo's first quarter was lifeless and you could tell his own frustration was bogging the rest of the team down as well. Rondo still had a team-high five attempts at the rim, but missed four of them and you could see his confidence suffer because of it. He has to have the shortest memory on the team and put struggles behind him, because the rest of the team is feeding off his energy.

3. Prediction time: How does Sunday's game play out at the Garden?

Payne: The Celtics will bounce back, due more to Rivers' motivation than anything else. The C's have to be assertive on the glass, and pick-and-roll defense has to be on point, but I'm expecting a strong effort against one of the East's best teams. A win would certainly help silence any (premature) panic rumblings that might be starting to surface again.

Robb: I look for the Celtics to show a lot pride here against a rolling Bulls team, for the reasons I mentioned above. They sleepwalked through the first half last time Chicago was in town, before a valiant second-half comeback came up short. At this point, Rivers can assure his starters that they can't afford to dig themselves any more early holes and they won't have a shot unless they bring some energy against the athletic Bulls. Given this, I look for a defensive dogfight to ensue and the C's to buy themselves a little more time together with a gritty 89-86 win.

Forsberg: I say this often, but it holds true with this one: We'll know in the first five minutes how this one is going to play out. The Celtics absolutely have to come out inspired and take control of this game early. If they don't, it's easy to imagine they will start pressing and worrying about further drawing the ire of their coach. Listen, the Bulls should have won the first meeting by 30 points and let Boston back into the game. They might not be so fortunate this time around if the Celtics don't land an early haymaker.