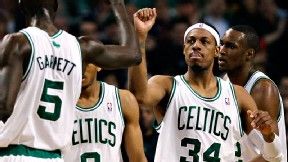 Paul Pierce and the Celtics are playing inspired defense this season.Looking for a little bit of encouraging news after two lackluster losses have diminished confidence in the previously surging Celtics? Well, we knew Bostons' defense had been performing at a high level lately, but Elias Sports Bureau puts it in perspective while pointing out Boston's current century-free streak:

The Celtics allowed more than 100 points in each of their first two games this season (106 and 115 in losses to New York and Miami, respectively), but they’ve held their opponent to fewer than 100 points in each of 24 games since then. No other NBA team has a current streak of more than seven games in which they allowed fewer than 100 points. Boston’s streak of 24 straight games without allowing 100 or more points is the longest for any NBA team since the Bulls did that in 26 straight games in 2004–05, and it’s the longest such streak for the Celtics during the shot-clock era (1954–55 to date).

With the likewise defensive-minded Bulls in town Sunday, there's a good chance that streak reaches a quarter-century today. Speaking of runs, Elias points out how Ray Allen had a personal streak broken Friday night in Toronto:

Ray Allen missed his only 3-point field-goal attempt in Friday night’s loss at Toronto. Allen had made at least one three pointer in each of his 21 previous games this season.

Don't fret, Allen is still shooting a ridiculous 51 percent beyond the arc this season.