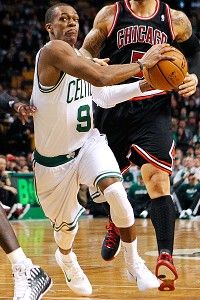 Rajon Rondo keyed the Celtics' pace.BOSTON -- Think pace of play was an area of focus for the Celtics before Sunday's game?

After slogging through a lifeless 82-possession loss in Toronto on Friday, the Celtics cranked up the pace Sunday, outracing Chicago in a game that featured a whopping 97 possessions (tied for second most this season for Boston, behind only a 104-possession, turnover-plagued footrace in Miami in the first week of the season).

The Celtics rank 30th in the NBA in pace at an average of a mere 90.2 possessions per game, according to HoopData, a whopping 3.6 possessions below the league average, and more than seven possessions less than the league's fastest team (Denver, 97.5).

Celtics coach Doc Rivers was adamant his team up the tempo Sunday.

"I thought we played at a better pace today," said Rivers. "You could see it: We were trying to run today. And that’s how we have to play. If we didn’t turn the ball over, we would’ve had far more points. But I just liked our pace and that’s all we talked about after the game in Toronto and today in our morning walkthrough -- was enough of the walking.

The Celtics, who have turned into a jump-shot happy team at times this season, make things so much simpler on themselves by generating easy points in transition (aided by newfound athleticism with the likes of Chris Wilcox and JaJuan Johnson). In fact, Boston ranks second in the league averaging 1.193 points per play in transition, according to Synergy Sports data. When the Celtics don't run, they are left clinging to the hope that they hit their jumpers. And when they don't fall, Boston can be an easy team to beat.

Pace doesn't necessarily dictate success. The Celtics are averaging 90.4 possessions in wins this season and 91.4 possessions in losses. Part of Boston's problem is turnovers, which work against the team even in high-possession games. But the eye test says it all: If Boston can crank the tempo and value the ball, they are a tough team to beat.

Said Kevin Garnett: "[Running] opens up the floor, not just for Rondo, but for Paul and Ray also. It opens up the floor, when you have to deal with [Rondo] in the open floor, with his speed and his strength to get to the basket. Then you know, the defense converging on him and he’s kicking the ball out to Ray [or the other shooters]... it just makes the game easy."