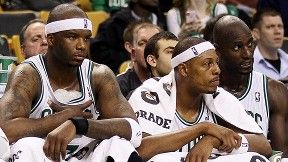 The veterans on the Celtics' roster could benefit from upcoming downtime.The Boston Celtics are set for a rare (and much-needed) practice session Tuesday afternoon.

Boston, which hasn't had an honest-to-goodness, full-throttle practice since squeezing in a session in Orlando on Jan. 25, has been leaning on morning shootarounds and pregame walkthroughs to clean up slippage in play. Celtics coach Doc Rivers has admitted there's little that can be done on gamedays -- at least in terms of high-impact effort -- and with a need to rest veteran legs on the few breaks this condensed schedule offers, Boston has limited offday activity.

Even after Sunday's win over the NBA-leading Chicago Bulls, Kevin Garnett, outspoken in his disappointment in a shortened training camp in order for the season to tip off on Christmas Day, took another shot at the condensed schedule and the haste at which the 2011-12 season was put together.

"This is what I talk about [with] practice and how important practice is," Garnett said of bouncing back after two listless losses to the Lakers and Raptors. "Throw the season together, without practice time, and this is the stuff you see. I’m not going to back off that. You want quality product? You have to give time for that quality product to be quality. And you have to have time for that. It’s not just something that [comes naturally], just because you have four [veteran] guys that have been together [in the Celtics' starting lineup]. You've got a whole group of guys you see here. And chemistry is everything. I’m not going to back off that. We have some days that, when we do have some practice time, you’ll see a better, quality effort [and] product."

The Celtics play a back-to-back later this week with the Pistons visiting on Wednesday and a rematch with the Bulls in Chicago on Thursday. Boston then has another two-day break with the team planning to squeeze in an offday practice in the Chicago area before resuming play Sunday evening in Detroit.

Combined with the All-Star break, Boston will have a chance to work out some kinks -- and get some rest for ailing bodies -- before the schedule really ramps up in March (including a season-high eight-game road trip that starts with five contests out west before the Celtics work their way back east).