With the All-Star break nearing, NBA.com handed out midseason report cards to all 30 teams last week and the Celtics graded out better than you might expect: 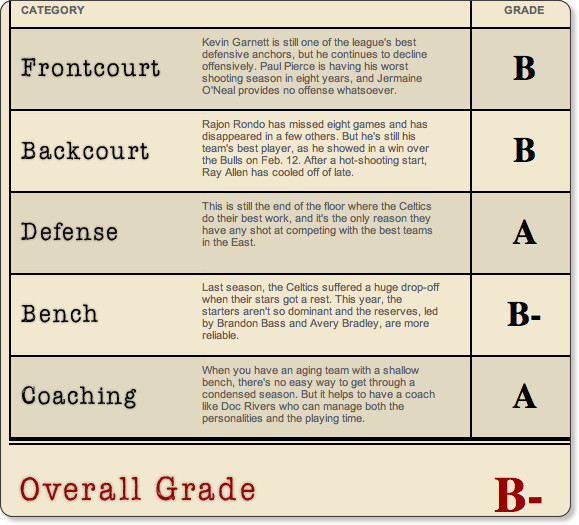 In a condensed season, an experienced team like the Celtics just wants to survive the regular season and get a decent seed in the playoffs. And though it hasn't been pretty (they've cracked the 100-point mark just five times), the Celtics have survived thus far. They actually won six of the eight games Rondo missed, and they've benefitted from an easy and home-heavy schedule early on. After a 5-9 start, they won nine out of 10 games to put some fear in the rest of the Eastern Conference, but have since flattened out. And in reality, they may just be a .500 team. Offensively, they're below average. As usual, turnovers are an issue. And they no longer get to line as much as they used to. In a related point, the Celtics no longer own the paint. After outscoring their opponents by 5.2 points in the paint per game over the previous seasons, they're getting outscored by 4.4 this season. Allen and Garnett are free agents this summer and the big three era may be over sooner than that if Danny Ainge gets an itchy trigger finger around the trade deadline. The cracks have been showing for a while now, and for Ainge, surviving may not be enough.