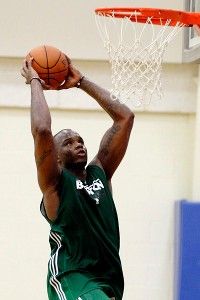 O'Neal is expected to meet with team physical Dr. Brian McKeon and a hand specialist on Tuesday, according to the team.

O'Neal originally injured the left wrist while taking a charge in a preseason game against the Toronto Raptors at the start of the 2010 season. He aggravated it in the postseason against the New York Knicks last year, but elected to not pursue offseason surgery, feeling it might jeopardize his ability to get back on the court this season. O'Neal also appeared to tweak the injury earlier this season, but the aggravation last Monday night was enough to prevent him from playing in the pre-All-Star finale in Oklahoma City.

Now, in seeking the advice of a specialist, it would appear that O'Neal is seeking a way to stay on the floor and avoid the sort of surgery he feared this offseason (at the time, it was suggested he would need four months to recover).

O'Neal has missed nine games this season due to knee, shoulder, and wrist ailments. Last season, he sought multiple opinions on a chronic left knee injury before electing to take time to strengthen the area around the injury. When that showed no immediate improvements, O'Neal ultimately elected for surgery, missing 58 regular-season games, but returned in time for the postseason.

Given the schedule in this condensed season and the team's lack of true size at the center position, the team doesn't have those same luxuries to afford O'Neal this season. The injury is to his non-shooting hand, so that could aid him in trying to stay on the floor, but O'Neal has absorbed a lot of punishment by giving up his body for charges throughout the year.

In positive injury news for Boston, both Brandon Bass and Chris Wilcox were with the team for Monday's practice and the expectation is they should be available on Tuesday. Wilcox departed Monday's game against the Mavericks with a right adductor strain and sat out the pre-All-Star finale against the Thunder, while Bass has missed the last six games due to left knee inflammation. One of the two players would seemingly be in line to take O'Neal's spot in the starting lineup against Cleveland.