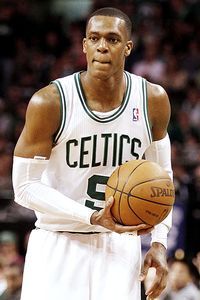 Celtics point guard Rajon Rondo is in the rumors again.As part of an Insider

article discussing big names that could be on the move as the NBA trade deadline approaches, ESPN.com's Chris Broussard offers the following on Celtics point guard Rajon Rondo:

Boston is aggressively shopping Rondo, according to sources. The Celtics find Rondo's personality to be too high-maintenance and his clashes with coach Doc Rivers continue. With the Celtics having realized they are no longer title contenders, they don't believe the payoff is worth the headaches Rondo brings, sources say. And they do not want to build around him. In December, the Celtics had discussions with Golden State about a Stephen Curry-for-Rondo deal, and one source says it was Golden State that decided against pulling the trigger. But Curry's recent ankle injuries, which have caused him several problems in his short career, have given the Celtics pause. The potential trade is still being discussed by Boston's braintrust, but they aren't sure they want to go forward with it. It also isn't clear whether the Warriors would be willing to do it. Other players would have to be thrown in to make it work financially.